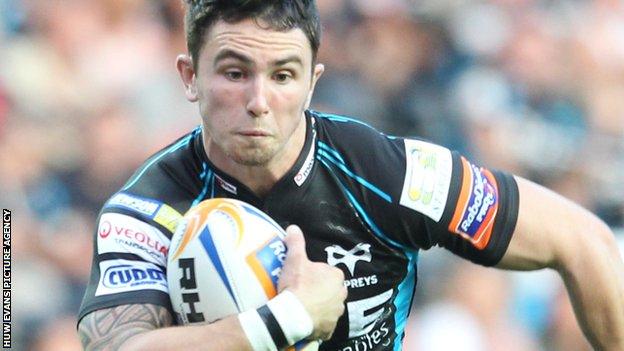 Wing Kristian Phillips will leave the Ospreys at the end of the season to join the Scarlets.

The 21-year old, who was out of contract at the Ospreys at the end of May, has confirmed he will join the Scarlets.

Phillips scored four tries in 20 appearances for the Ospreys since his debut in May 2008.

He played seven games for the Ospreys this season but his last appearance was against Northampton in October.

"It's a very exciting time to be joining the Scarlets, the way they play the game, the crowds they're attracting at Parc y Scarlets and the talent and class of the players in the squad," said Phillips.

"This is a big opportunity for me and I'm really looking forward to getting started.

"It's been a frustrating past 18 months for me, in terms of the amount of game time I've had and I'm just raring to go now.

"I think this move will be really good for me in terms of the coaches and players I'll be joining and it will be a great set-up to be a part of.

"The Scarlets are known for their flair and attacking style and that will suit my game with ball in hand."

The Neath-born player has represented Wales at under-20, under-18 and under-16 levels and was called up to Wales' 2010 Six Nations squad but has yet to win a cap for the full side.

Phillips has also played for Neath, Tonmawr and Bridgend in the Welsh Premiership.