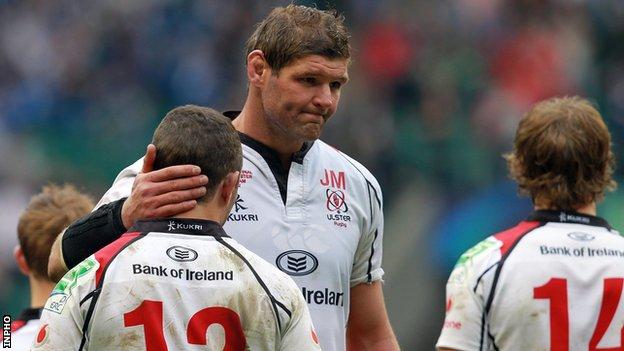 "The two tries were extremely disappointing," said McLaughlin after his last match in charge of Ulster.

"We fought back but Leinster showed what a quality side they are."

McLaughlin agreed that Leinster "deserved to win the trophy" although he felt that the late tries from replacements Heinke van der Merwe and Sean Cronin gave the scoreline a "flattering" look for the winners.

The Ulster coach defended his decision to start youngster Paddy Jackson at fly-half instead of the more experienced Ian Humphreys.

Jackson missed a drop-goal chance from in front of the posts after a period of Ulster pressure in the first half and was replaced by Humphreys six minutes into the second half after kicking the ball out on the full.

"I wouldn't do anything differently at all. We knew it was always going to be difficult," added McLaughlin.

"It was heartbreaking watching Leinster lift the trophy but that is what you learn from."

"We felt that for this game and for the semi-final that he [Jackson] was the man we needed in there. I wouldn't change that at all.

"We came here with great hope. We knew we were up against a quality side and that we had to take every chance that was going.

"At this level, you can't afford to do that."

Ulster were back in the Heineken Cup final for the first time in 13 years and hooker Rory Best insisted the pain of defeat had to be a source of inspiration.

"It was heartbreaking watching Leinster lift the trophy but that is what you learn from," Best said.

"You have to watch that and that has to drive you for next year.

"Defeats like this and watching Leinster lift the trophy has to be in our minds now for the next 12 months.

"We can't pat ourselves on the back for being in the Heineken Cup final when four years ago you thought you were never going to get out of the group."