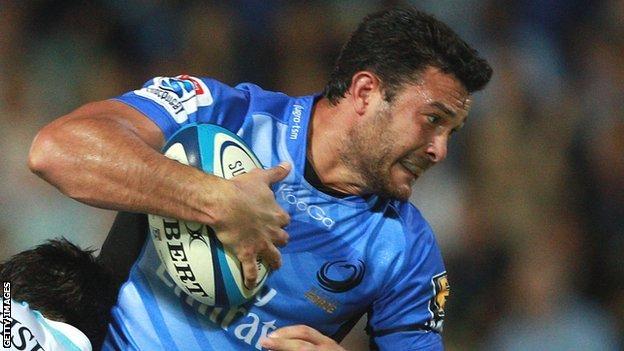 The 28-year-old, who can also play on the wing, is the Super Rugby side's all-time leading points scorer and has nine international caps.

Saints director of rugby Jim Mallinder told BBC Northampton: "We've been watching him for a few years now and admired the way he plays.

"We think he'll be able to make a massive contribution."

Mallinder added: "Any player who's played for Australia is talented.

"He's an outside back and he's got a very good kicking game. You'd rather have it that way [with Stephen Myler, Ryan Lamb and Shepherd] than have nobody who can kick goals."

The Premiership Rugby board has decided that, from the 2012-13 season, clubs will be able to exclude one marquee player from their salary cap.

But Mallinder denies that Shepherd is that player.

"We don't make marquee signings - he's a good quality international player and we're looking to make a couple [more] announcements in the near future."

Jim Mallinder has kept a close eye on Cameron Shepherd, a dangerous runner and a consistent performer from the kicking tee.

But he's also been blighted with injury during his time at the Force.

He's keen for a fresh start at the Saints when he arrives in August.

Expect a few more announcements in the coming weeks as Saints are keen on signing a new fly-half as well as another centre.

With the departure of Chris Ashton to Saracens, Shepherd seems most likely to fill that spot in the team for the Premiership semi-finalists.

He is the Saints' fourth signing for next season, after Luther Burrell,Sam Dickinson and Gerrit-Jan van Velze.

"Northampton is similar to the Force in that it has a great fan base behind the team and I'm looking forward to showing the Saints supporters what I can do as a player," said Shepherd.

"I've heard lots of good things about Jim Mallinder as a coach and about the Saints as a club.

"You can see that with the quality of player that there is at the club, players like Ben Foden and George Pisi, who are established internationals.

"Jim has got the team playing a great brand of rugby which I believe suits my style of play. I can't wait to get there."

Shepherd won the first of his nine international caps against England - the country of his birth - and he also played for the Wallabies in the 2007 World Cup.