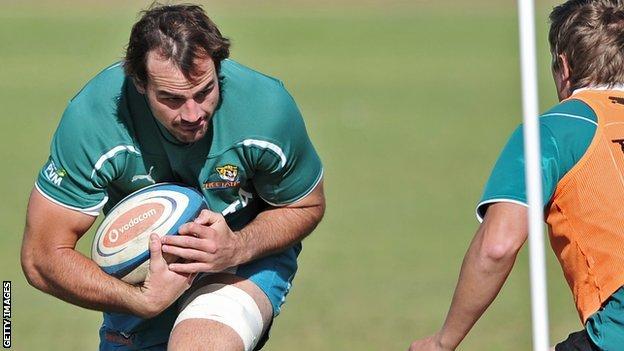 Scarlets head coach Nigel Davies, who has been linked with taking over at Gloucester, has targeted new locks.

"This is a significant signing for the Scarlets, George is in his prime as a player and is ambitious to make a mark over here," said Davies.

Uncapped Earle has also played for the Lions in Super Rugby.

"He will bring a tough edge and different set of experiences from his career in Super 15.

"He gives a new dimension to our second row options and we know we need to enhance and strengthen our set piece play going into the big competitions next season, particularly in Europe.

"This is an important and exciting new addition to the Scarlets squad for next season.

"He's really looking forward to joining the group of players here at Parc y Scarlets, and keen to get his first taste of northern hemisphere rugby and make an impact in the league and European competitions."

Reed, capped by Wales during their Six Nations Grand Slam campaign, has been linked with Cardiff Blues.

Welch has joined Aviva Premiership side Exeter, where he could come up against Bath-bound Day.

Earle, 25, has stated an added boost of joining the Scarlets set-up is that he will have a chance to be considered for the Welsh national team - once he has qualified to play on completion of the three-year residency period.