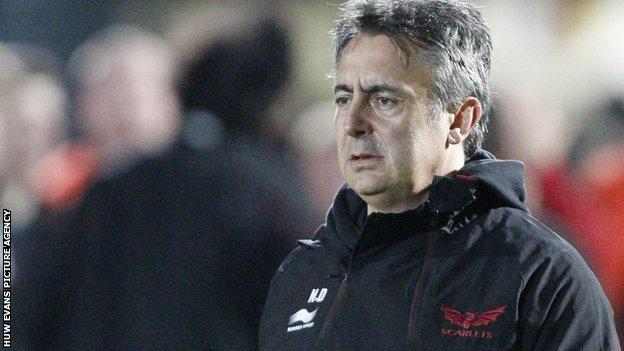 Wales caretaker coach Rob Howley hopes boss Nigel Davies does not leave the Scarlets to take over at Gloucester.

Ex-Wales centre Davies has been linked with succeeding Bryan Redpath at the Aviva Premiership club.

"It would be great if he could continue working... with the players that have shone for Wales," said Howley.

Nigel has done a terrific job with the Scarlets

The Scarlets missed out on the Pro12 play-offs but Owens believes the region have progressed during Davies' reign.

"I think we've created a great environment at the Scarlets. We're moving on year by year," said Owens.

"Everybody's involved with that, all the coaches and players.

"We're trying to keep as many together as we can now. We've done well last couple of years and moving on slowly.

"But I think we need to keep all the pieces of the jigsaw together.

"I've been training with Wales for the past week or so [and] I haven't been down to the Scarlets so I'm not too sure about the exact situation down there," added Owens.

"It's something to be thinking about at the moment but hopefully it can be resolved before long."

The English Premiership club are seeking a new head coach following the resignation of former Scotland scrum-half Redpath in April.

Davies, who won 29 Welsh caps at centre between 1988 and 1997, is believed to be on Gloucester's four-man shortlist.

The former Wales centre has been in charge of the Scarlets since May 2008 following the sacking of director of rugby Phil Davies.

Scarlets president Phil Bennett fears Davies's departure would be a huge blow to the region's development.

"I think it would be a massive blow because he is a quality coach," Bennett said.

"Nigel's come a long way. He's rebuilt the club after a dreadful couple of seasons."

Howley says Davies and his fellow regional coaches have helped ensure the Wales squad preparing to take on the Barbarians then tour Australia are fresh for the task.

Howley is standing in for injured boss Warren Gatland and said: "Nigel has done a terrific job with the Scarlets and you can only see from the Scarlets' input into the national team... nearly the entire backline.

"And I've got a huge amount of respect for Nigel and he's done a fantastic job.

"The one thing about the national team - it's a partnership with the regions and they've done a fantastic job in preparation for our players to come in fresh for what is going to be a really important tour for us."