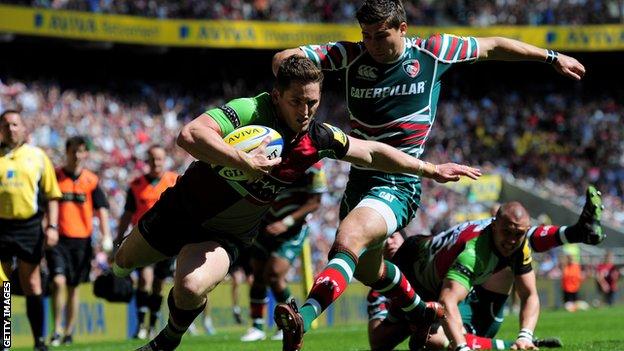 Harlequins won their first ever English title with a thrilling Premiership final victory over Leicester Tigers.

Anthony Allen crossed for Tigers and Ford converted and landed a late penalty, but Harlequins held on.

After last month's enthralling encounter at The Stoop - which ended 43-33 to Tigers - sceptics in the Twickenham crowd would have been forgiven for assuming there could be no repeat.

But from the off, Harlequins were determined not to disappoint, shifting the point of attack quickly with pop passes as they drew the Leicester defence out of shape.

The Mediterranean conditions were tailor-made for running rugby and Harlequins produced an opening 20 minutes as breathless as they were ambitious.

Three years ago Quins were down and being vilified for 'bloodgate' so to come back from there to where they are now, I'm very proud of them. They are doing things right for English rugby.

They were soon ahead, Evans's third-minute penalty followed by a Williams try, the winger striding over with ease on the right as the London side's pack produced phase after phase of quick ball.

Evans, who had hit the upright with another penalty attempt, was again denied by the posts, missing the conversion to leave Quins 8-0 ahead.

Leicester pulled three points back with a Ford penalty following a Marcos Ayerza break but the Midlanders were struggling to impose their gameplan.

For Quins, Danny Care was proving a livewire and he took a quick tap penalty to put them deep inside Tigers territory.

Evans made amends for his missed kicks on 22 minutes when Leicester's front row collapsed at the reset and his kick from 30 metres out on the left bisected the posts.

But Ford, who had earlier missed from 40 metres, could not miss from 12 after an already kickable position was marched 10 metres forward by the referee for backchat.

From the restart came the moment that finally gave Tigers some control as Alesana Tuilagi produced a rib-busting tackle on the superb Mike Brown and, although Quins recovered to clear their lines, they found themselves behind within two minutes.

A Quins throw-in was gathered for the Tigers by Dan Cole, who drew the defence before putting Mafi clear, and the rangy Tongan strode over the tryline from halfway.

Ford converted to give Tigers the lead at 13-11 - but when Thomas Waldrom was yellow carded for killing the ball 40 metres out at a ruck, Evans slotted for Quins to make it 14-13 at half-time.

The New Zealander kicked another penalty after the break and, although Care's sweet grubber kick to the corner after some inventive off-loading just evaded Brown and Ugo Monye, referee Wayne Barnes called play back for an earlier offside and Evans obliged with the boot once more to make it 20-13.

The victory means Harlequins are only the third club in Premiership history to finish the season top of the table and claim the title after Sale and Leicester.

Waldrom returned for Tigers having seen his side concede nine points while sin-binned but they made unforced errors, spilling the ball from a promising turnover before a midfield offload by Manu Tuilagi went forward.

By contrast, Quins persisted with their policy of passing out of every tackle and with 24 minutes left Robshaw popped up just two metres out to crash over after good work by Joe Gray and Jordan Turner-Hall.

Evans converted and when Joe Marler and James Johnston forced a scrum penalty Evans made it 30-13.

But just when Leicester seemed dead and buried, Ben Youngs took a quick penalty, thrust into the Quins 22 and found the supporting Allen.

He crossed under the posts and 19-year-old Ford converted to make it a 10-point game with 13 minutes remaining before slotting an easy penalty to put Leicester within a converted try of Quins.

The Londoners responded by looking to run the clock down on their opponents' 10 metre line but two penalties gave Leicester an attacking line-out and with 50 seconds to go they went for broke.

However, they were denied a chance to force the game into extra-time when they conceded a penalty in front of Quins' posts with time up.

The victory means Harlequins are only the third club in Premiership history to finish the season top of the table and claim the title, repeating the feat of Sale and Leicester.

"A couple of years ago this team said it wanted to create a different chapter in Quins history."

"We want to be a great side. This has to be a starting point. We'll start from scratch next year, but we'll enjoy tonight.

"It's a very special day for the club. I'm so proud of the effort of those players."

"We didn't cherish the ball. We tried to force it a bit too much which we didn't want to do.

"They outplayed us at times although we still managed to score two good tries and fight right until the end again.

"But they probably deserved it. We will go away now and regroup."