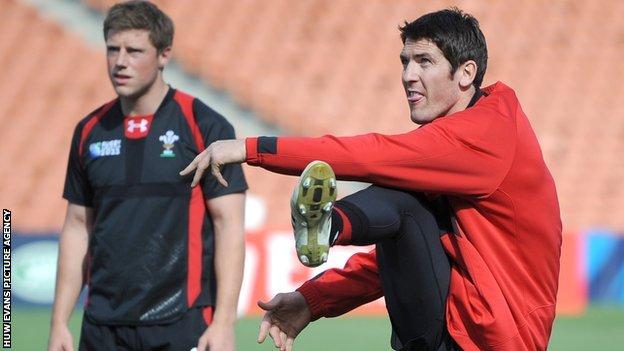 James Hook believes helping Perpignan avoid relegation in the French Top 14 can boost his bid to be Wales' regular fly-half.

The 26-year-old hopes to dislodge Rhys Priestland, who was Wales' first choice 10 at the 2011 World Cup and 2012 Six Nations Grand Slam that followed.

A Wales utility back in recent seasons, Hook has been Perpignan's 10 this term.

"It was good for me to play week-in, week-out in high-pressure games, to see out those games and win them." he said.

"We were fortunate enough to do that against some good sides at the end of the season.

"It was important for me to settle somewhere and play week in, week out.

"It's probably the first time since my Neath days that I have played so many games on the trot at outside-half and I feel confident going on to the pitch."

Hook lost the fly-half battle against Dan Biggar at former team the Ospreys before heading for France for this season, but was preferred as back-up along with 104-cap veteran Stephen Jones, 34, during the Six Nations.

Biggar is back in contention having been overlooked for the 2011 Rugby World Cup and Six Nations Championship.

But Wasps-bound Jones' international days seem to be over.

Hook, who has made 62 Wales appearances and toured with the 2009 British and Irish Lions to South Africa, added: "I feel happy where I am and I'm enjoying it, which is what it is all about.

"Playing there [fly-half] at club level has to help me internationally, but it is up to the coaches and injuries and things like that, which you can't really help.

"I would never turn down the opportunity to play for Wales, wherever the position is.

"But it makes it more difficult for the coaches to pick you as a fly-half if you are not playing there regularly for your club, so that helps."