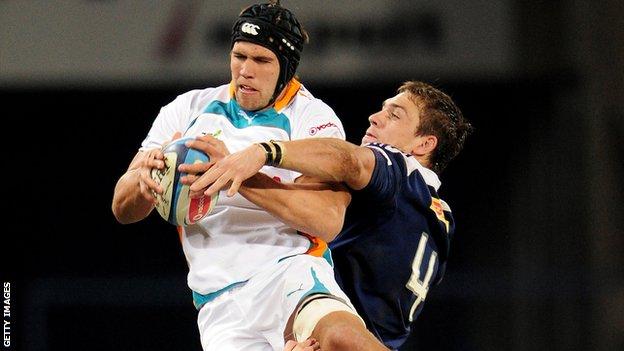 The 26-year-old will arrive from Free State Cheetahs in October due to Currie Cup commitments in his homeland.

"I want to test myself against the top players in Europe," van der Westhuizen told the club website.

"So when I found out Edinburgh Rugby were looking for a player with my skill-set, I was desperate to sign. I like the pace the boys play with."

Van der Westhuizen made his Super Rugby debut in 2010 and has started all 12 of the Cheetah's matches this season.

"I run the set-piece for the Cheetahs but, when the ball's in play, I like to be in the centre of the park getting stuck into the physical side of the game and hitting rucks," he added.

Edinburgh have invested heavily for next season, with Ben Atiga and Dimitri Basilaia among a raft of new recruits.

"Over the course of this season we have been putting the right building blocks in place to tackle what is arguably the most eagerly anticipated season in the club's history," said head coach Michael Bradley.

"Reaching the Heineken Cup semi-final set the benchmark for our players' performance so we have recruited and retained a number of key players to bring consistency to our season and set a new standard for Edinburgh Rugby.

"The increased investment in our squad from Scottish Rugby will not only intensify the competition for places but means we will be on a much stronger footing to compete on all fronts, all season."