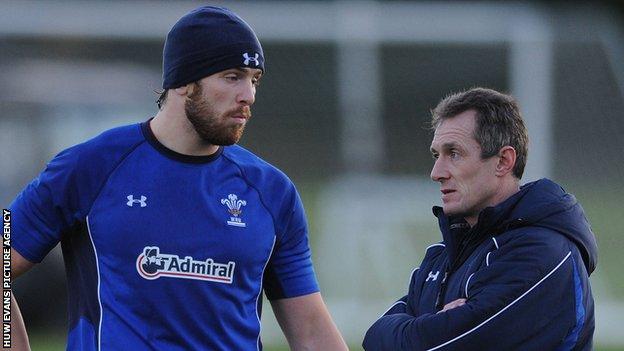 But Howley insists it will be difficult for Leinster, despite home advantage, to lift themselves again against the in-form Ospreys.

"They [the Ospreys] will win I think. They have got a great opportunity," said Howley.

The former Wales scrum-half has admitted to being in a similar position to Leinster when he won the Heineken Cup with London Wasps in 2004.

"Having been in London Wasps and been in a Heineken Cup final and played Bath the week after [in the Premiership play-off final] we didn't train until the Wednesday/Thursday and had two sessions.

"It's how Leinster prepare [that matters], but psychologically when you become European Champions to go out and try and play a game which is then your regional equivalent [is tough]."

They beat Northampton in the Heineken Cup only to lose to Munster in what was then the Magners League title decider a week later.

The Ospreys go in to the final on the back of six straight Pro-12 wins including a 45-10 victory over Munster in the semi-final.

"The Ospreys will have had two weeks prep and obviously the Leinster Heineken Cup game has been a huge part of their psyche over the last week," said Howley.

"It will be great for Welsh rugby and great for Steve Tandy and the Ospreys players if they go on and win it."

In all 12 of the Ospreys are in Wales' the 38-man training squad for the Barbarians clash and the three-Test tour of Australia.

And those Ospreys players will not train with Wales until two days after the final.

"We have given them the Monday [28 May] off as well. I think it's really important from a player-management perspective," added Howley.

"We have co-ordinated with the Ospreys particularly well and made them aware of the situation.

"To play in finals gives you confidence and self-belief and that's what we all have when these players come back into us.

"They have got 100% support from us because it's so important to have a Welsh side in the RaboDirect [final].

"We didn't want to affect their preparation at all and I think it's so important we give them 100% support."

Until the final has been played Howley confirmed he will not know the identity of the 15 players who will fly out to Australia as an advance party.

That group, being taken to Australia by defence coach Shaun Edwards on 31 May, is almost certain to be the starting XV for the first Test in Brisbane on 9 June.