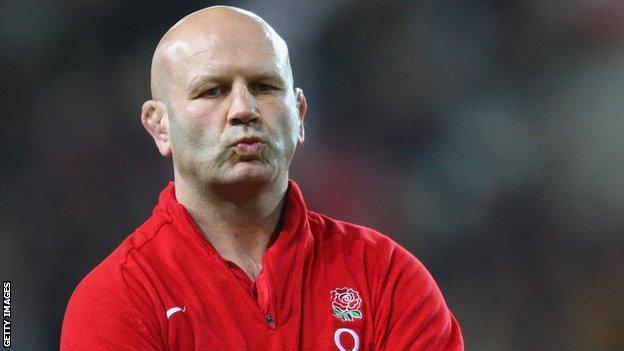 Former England lock Nigel Redman is to leave his backroom role with the Rugby Football Union to return to Worcester as forwards coach.

"It was a tough decision," said Redman. "But I'm excited at what's happening at Worcester and want to be part of it."

The former Bath, England and Lions forward left his academy director's role at Sixways to become a national academy coach in 2004.

Since then he has coached England's Under-20s to a Six Nations Grand Slam.

They also won the Junior World Championship final that same year under Redman in 2008.

Redman, who replaces Cardiff-bound Phil Davies, will be linking up with his former Bath and England team-mate Richard Hill, the Warriors head coach.

"The RFU have been very supportive in getting me to where I am and in making my decision," added Redman, who won 20 caps for England.

I wasn't necessarily going to go for Nigel Redman as he is a friend of mine and it's sometimes a bit difficult working with friends. But he is meticulous and an excellent technical coach, who is very good in developing young players

"Now I'm looking forward to working with Richard Hill, the coaches, players and people at Worcester."

Warriors coach Hill, who is also expected to shortly unveil a new post of backs coach at Sixways, told BBC Hereford & Worcester: "There were one or two names that were in the hat for the post and I floated those in the dressing room.

"There were a couple of candidates who came through very strongly and, from the forwards' point of view in particular, Nigel was somebody they knew through age-group rugby or from his time as academy manager here.

"His reputation was excellent. That was the candidate they felt they wanted and that had a big influence on my selection.

"I wasn't necessarily going to go for Nigel as he is a friend of mine and it's sometimes a bit difficult working with friends. But he is meticulous and an excellent technical coach, who is very good in developing young players.

"He has a very good up-to-date knowledge because he has been working with all the international teams right the way through the age groups."