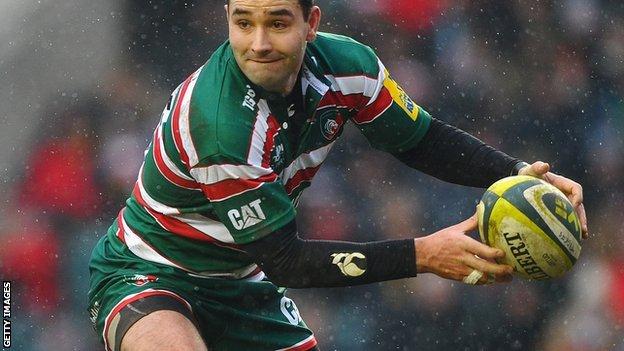 Leicester Tigers fly-half Jeremy Staunton says he is not sure where - or if - he will be playing next season.

The former Ireland international, 32, has not had his contract renewed and will leave the club after Saturday's Premiership final against Harlequins.

Staunton told BBC Radio Leicester: "I am leaving it late in the day but I am not going to rush into anything and there is no point in getting stressed.

"What happens next season - playing wise or not - who knows."

He has made more than 50 appearances for the Tigers since joining in 2009 and played in the Premiership final victory over Saracens two years ago, but only 12 of them have been this season and he is unlikely to be involved in Saturday's showpiece final at Twickenham.

Despite falling further down the pecking order at Welford Road following the emergence of George Ford, Staunton is a reluctant departee.

"There's no hiding away from the fact that I am disappointed," he said.

"I have enjoyed my time and would like to think I have played my part in some of the success we have had over the last three seasons - and if we can add to that this Saturday, then happy days.

"It would be good, even though I will not be involved, to leave on a positive note.

"It's been without doubt the best club I have been involved in - the team, the supporters and the environment.

"It's been an incredible journey and incredible experience, so a big thank you to Leicester and the people of Leicester for giving me that experience."

He added: "Hopefully we can celebrate a win on Saturday, I can say goodbye to the lads at the weekend and head back home to Ireland for the summer and enjoy it.

"It will be the first time in 13 years when I might get a summer. so I will look to take advantage of that - that's the immediate plan.

"Things can happen over the summer for the better, so it's not a case of making a decision straight away when it could be the wrong one."