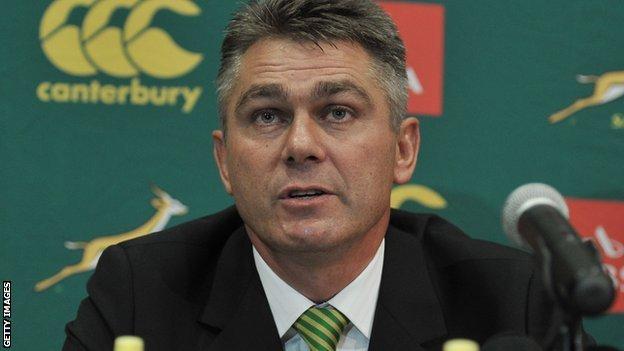 Heyneke Meyer said his South Africa side will not underestimate the challenge posed by England when the teams meet in June's three-Test series.

The former Leicester coach, who was appointed as Springboks chief in January, was impressed by England's performances in the Six Nations.

"There's a lot of respect for England," he told BBC Radio 5 live.

"They started slowly at the Six Nations, but grew stronger and stronger during the tournament."

He added: "England will be a great challenge. They have done brilliantly after the World Cup and I've been impressed with the way they fought back and the character they showed.

"You don't beat France away from home if you're not a great side."

Meyer said that his squad for the home Tests may mirror that of opposite number Stuart Lancaster's in containing more youth than experience.

And he fears other star players could pick up injuries in the Southern Hemisphere's Super 15 tournament, which does not start its break until a week before the Test series begins.

In the final round of matches before the lay-off, four South African sides will go head-to-head.

The Lions host the Sharks, while the Bulls play the Stormers.

Meyer, who succeeded Pieter de Villiers in January, will then assemble his first South Africa squad three days before the first Test with England in Durban on 9 June.

"There's a big concern about the lack of time we have to train together," he said. "That's why it's difficult to pick a side because there will be injuries after those derbies.

"It's not an ideal situation but you can't make excuses. It's going to be a huge challenge for us but the guys are really motivated."

Meyer added that he would consider World Cup-winning scrum-half Fourie du Preez, who is contracted to Japan champions Suntory Sungoliath but recently said that he is available if needed.