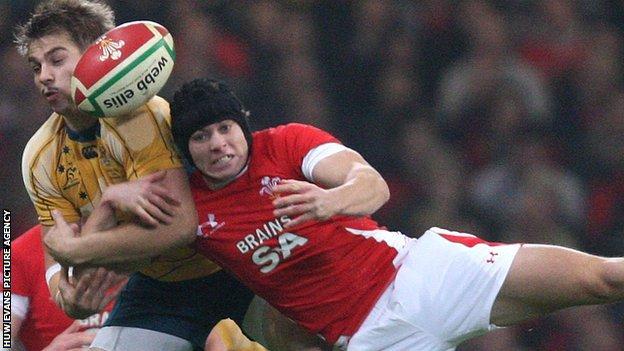 Leigh Halfpenny says Wales must underline their ambition to be the world's best by beating Australia when they tour down under in June.

Wales have not won a Test against Australia on Wallaby soil since 1969 and have never won a Test hosted by New Zealand or South Africa.

"When the southern hemisphere sides go away they win, and that is what we want to do," said Halfpenny.

"We want sides to take us seriously wherever we play them."

And he added: "They will only start to respect us when we beat them in their own back yard.

"We want to send out a message to the whole world that we mean business and we want to be [the] best in [the] world."

Wales have beaten the Wallabies overseas since 1969, taking third place at the inaugural World Cup in 1987 with a narrow win at Rotorua in New Zealand.

At the 2011 tournament, Australia gained a measure of revenge in the corresponding fixture by beating Wales.

Within a month, the Wallabies had also won against Wales in Cardiff and the teams face each other four more times this year.

Wales take them on in three June Tests and the Wallabies visit the Millennium Stadium on Saturday, 1 December.

Halfpenny says he and his Grand Slam-winning team-mates are determined to take another step towards becoming serious contenders against the world's leading nations.

He added: "We are still hungry for what's to come, for that challenge of playing a southern hemisphere team in their back yard.

"It's going to be a real tough tour but one we are looking forward to, and we are looking to go there and win the series because anything else is not good enough.

"I have not beaten a southern hemisphere team with Wales.

"We have come close but not quite got the result. It is something I want to achieve as well as everyone else in the squad."

The 23-year-old Cardiff Blues team-mate of Sam Warburton says the flanker's return to fitness ahead of the tour has been a big boost.

"Sam is massive for us, not just as a player, he leads by example. He is such a great leader," said 32-times-capped Halfpenny.

"We had a good win against Ireland in the World Cup (quarter-finals) where we could easily have gone out and celebrated but we didn't.

"It was a great win, we were through to the semi-finals and for the whole of Wales it was amazing, but we still felt we had unfinished business and we had another game.

"Sam called us together and said we would have a curfew and every single player was in by that time.

"No one was out after that at all and that is professionalism, not getting carried away and keeping a lid on things.

"There are examples like that where we are just professional in everything we do and Sam leads that."

Wales also take on the Barbarians ahead of the trip to Australia, but with only a week between fixtures, 15 of Wales' players will fly down under before those left behind take on the invitation club.

But for Halfpenny, the tour to Australia will bring down the curtain on a roller-coaster year in which he overcame a foot injury to star at the World Cup and in the Grand Slam.

In the process he made the number 15 shirt his own.

"This time last year I was still in plaster and on crutches, it is great to reflect on it, it's been a good year," he said.