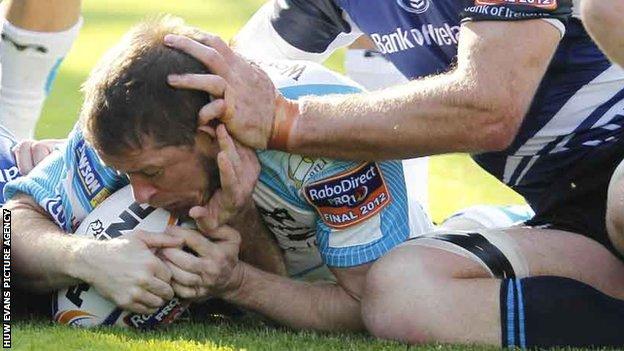 Shane Williams signed off his Ospreys career in style with a late try to steal the Pro12 title from European champions Leinster.

Dan Biggar had to convert to seal victory and the fly-half showed nerve and technique with the tricky kick.

Leinster seemed set for a domestic and European double with two tries from Isa Nacewa and Sean Cronin's score.

But Ashley Beck and Williams scores kept Ospreys in touch until the wing's second, final flourish.

Two years ago Ospreys had denied Leinster in the final at the same RDS ground and with another thrilling win have broken their hosts' hearts once more.

Ospreys now have four titles to their name, pulling clear of rivals Munster in the league's trophy stakes.

Just as it had been in their impressive semi-final win over Munster, Ospreys' first-up tackling was ferocious.

But Leinster stayed patient and went through a dozen phases, before the visitors gave up a penalty in their frustration to get hands on the ball.

The kick was 10 metres into Ospreys' half, well within the capabilities of Sexton, but the Ireland fly-half's kick held up in the stiff breeze.

A good kick-chase from Ryan Jones gave Ospreys their first foray into enemy territory and when Leinster infringed, Biggar stroked over a tricky penalty tight on the left touchline.

Leinster regained possession from the kick-off and when a second penalty chance fell to Sexton he made no mistake this time to level the scores.

The Ospreys scrum had dominated against Munster and Leinster were without injured prop Cian Healey.

The home side's front-row suffered another early blow as tight-head Mike Ford limped off within 15 minutes.

Replacement Nathan White's first contribution was earning a penalty for Leinster, as referee Romain Poite ajudged that Paul James had dragged down his opponent.

Ospreys continued to soak up intense pressure, but nearly scored a breakaway try when Andrew Bishop scooped up a spilled pass in midfield.

The centre had Rhys Webb in support, but Leinster had streamed back in numbers to kill the danger, albeit at the cost of a penalty in front of the posts that Biggar eased over.

When Ospreys made a mess of what had been a dominant scrum, Joe Bearman's hurried pass from the base went loose in the 22 and Leinster pounced.

Fergus McFadden nearly broke through down the right wing, but when the ball was sent back the other way, Brian O'Driscoll made a half-yard of space to send hooker Cronin over.

Sexton's excellent conversion from wide on the left put Leinster 10-6 up and into the lead for the first time.

Biggar replied with his third penalty after the Ospreys scrum put its dominance to better use.

That good work was undone in a moment as Hanno Dirksen completely misread Sexton's kick from the restart, allowing Nacewa to gather and canter over untouched in the left corner for a converted try.

With the half running down, Ospreys had Leinster by the throat as they opted for a series of scrums within touching distance of the Irish line.

Referee Poite sin-binned loose-head Heinke van der Merwe and awarded penalty after penalty, but would not give the penalty try Ospreys craved with each re-set.

Instead as the scrum collapsed for the umpteenth time it was Ospreys tight-head Adam Jones who this time was deemed to have been at fault, allowing Leinster to escape and bring the half to the end.

If the end of the first period had been all about Ospreys' grunt and grind, the start of the second showed the visitors also had flair and finesse.

Richard Fussell made a promising break down the right and although the full-back was hauled down, Beck picked a great diagonal line back against the grain to go over.

Biggar's conversion brought Ospreys within a point once more, but then Dirksen was penalised for holding on to the ball and Sexton stretched Leinster away.

A third Sexton penalty made it 23-16 and only a committed tackle from Biggar prevented Nacewa from adding to Leinster's tally as the wing was bounced into touch.

Ospreys responded with a flowing move that was taken on by Fussell, who gave Williams just enough space to squeeze in at the corner.

It was a fitting way for the wing to sign off in his last appearance in an Ospreys shirt before retirement, although Biggar could not gild it with a conversion.

Having watched a comfortable lead evaporate again, Leinster's pack went direct with a maul that drove deep into the heart of the Ospreys' defence.

Wing Nacewa joined in and the interloper ducked under two Welsh tacklers to score his second try, Sexton again improving the score to a seven-pointer.

But as the Ospreys piled on the pressure Nathan White became the second Leinster prop to be sin-binned, on 72 minutes.

Biggar punished White by kicking the penalty, then Williams again worked his magic to squeeze over in the right corner and bring Ospreys to within a point.

A hush fell over the RDS as Biggar lined up his most difficult kick of the afternoon.

But the fly-half proved up to the challenge to deny Leinster once again.