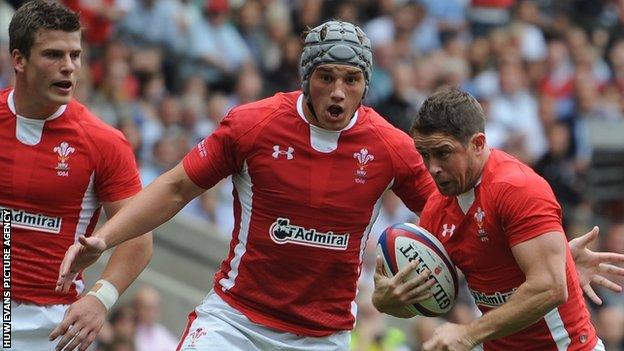 Shane Williams says Wales' current crop of stars are mentally the toughest he has known, but says their reaction to defeats will be crucial to their development on the world stage.

Test-retired Osprey Williams signs off from top-flight rugby against Wales for the Barbarians on 2 June in Cardiff.

Wales then head to Australia for three more June Tests.

"You've got to learn to play the bigger, better teams in the world and experience losses," he told BBC 5 live.

"It'll be interesting to see how they go there, perhaps if they do lose their first game, how will they bounce back from that, really, and go on from there.

"But I think mentally it's the toughest bunch of guys I've been involved with and I think the age [range] is a big sign of that.

"Because they're inexperienced and there's a no-fear attitude there.

"They just want to go out and play rugby and aren't really that fearful of losing games, which is great, it's refreshing."

Wales have not won a Test against Australia on Wallaby soil since 1969 and have never won a Test hosted by New Zealand or South Africa.

But Williams says history did nothing to quell Welsh self-belief when they aimed for glory at the 2011 World Cup that hosts New Zealand went on to win.

Wales came unstuck after skipper Sam Warburton was sent off against France in the semi-final and then lost the 21 October bronze play-off game to Australia.

Within weeks of their return from the tournament, Williams, 34, scored a final Wales try only for the Wallabies to again came out on top, this time in Cardiff.

But the wing who will help the Ospreys' Pro12 title challenge against Heineken Cup holders Leinster on Sunday, said: "These [Wales] youngsters were going to the World Cup to win it and I've never experienced that before in a Welsh side.

"Mentally they are very tough and they really, really do believe they are world-beaters, which is great."