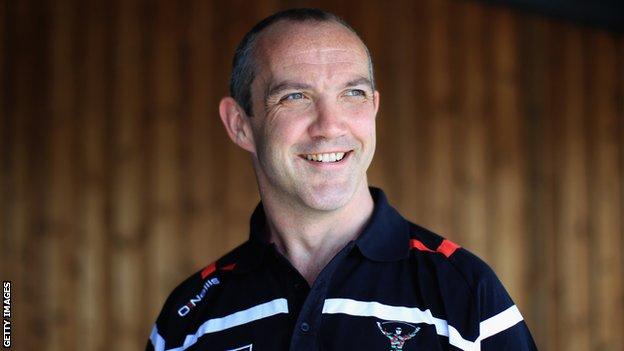 Harlequins director of rugby Conor O'Shea believes his side will keep improving whatever the outcome of Saturday's Premiership final.

Quins face Leicester Tigers in a bid to win the title for the first time in the club's history.

He told BBC London: "Whatever happens, we'll learn and become a better side. There'll be a challenge whichever way.

"If we don't win, we'll regroup. If we win, we'll have to back it up. Because that's what great teams do."

He added: "We're on the start of a journey that will be very special for this club."

Quins finished the season top of the table but must defeat an in-form Tigers side who have reached the Premiership final in each of the past eight seasons and are in pursuit of a record 10th English title.

O'Shea, who guided the London club to victory in the European Challenge Cup final last term, is comfortable talking down his side despite a memorable season that saw them perched atop the Premiership from the third week onwards.

"They [Tigers] are the standard-bearer with eight finals in a row and are justifiably favourites," he continued.

"They have to be favourites given what they've achieved."

Harlequins lost 43-33 to Leicester last month and O'Shea has urged his players to learn from and rectify their mistakes this weekend.

"We had our opportunities," he said. "We didn't take them.

"When we have momentum we have got to be clinical. We'll go out and play the way we know we can play.

"We've won enough big games over the last 12 months to know we can do this job."

Quins players have scooped both of the main player awards this year, with captain Chris Robshaw named Premiership player of the season (after claiming the same title two years ago) and fly-half Nick Evans winning the Rugby Players' Association player of the year award this week.

Having joined the club halfway through the 2009-10 campaign, with Quins still reeling from the fall-out from the "Bloodgate" scandal under former boss Dean Richards, O'Shea is confident that the foundations for sustained success have been built at the Twickenham Stoop.

O'Shea led Quins to an eighth-placed Premiership finish at the end of that season and although they only finished one rung above that 12 months ago, their potential was evident in beating Munster at their Limerick fortress in the Amlin Challenge Cup and then going on to beat Stade Francais in the final.l

"The belief I have in this group of players and where they can go over the years...we will grow organically and trust our own players," O'Shea continued.

"People will be excited by the way we play and rely on our own players rather than rely on journeymen. I think people will buy into what this club is about.

"From a playing and supporting point of view you just want them to succeed, because this is a great club."