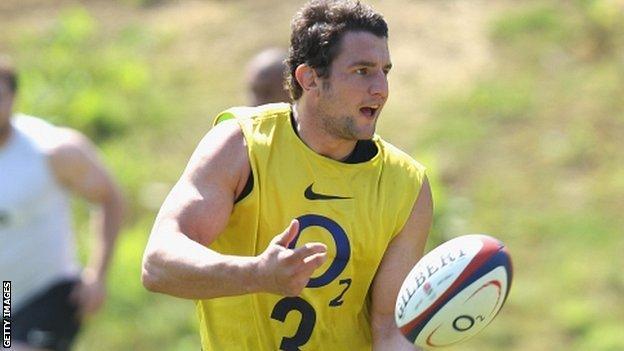 Phil Dowson has been named captain for England's non-cap international against the Barbarians on Sunday.

The Northampton man takes over from Test skipper Chris Robshaw, who will lead Harlequins against Leicester in the Premiership final the day before.

Scotland's Rory Lawson and Johnnie Beattie will also start in the match.

Wales's Duncan Jones is named among the replacements.

Dowson has been a senior figure in Stuart Lancaster's England squad, even after losing his place in the starting side to Ben Morgan during the Six Nations.

With Morgan recovering from a hamstring injury, Dowson will start and he has been chosen as captain ahead of his club skipper Dylan Hartley.

"Phil is one of the key members of our leadership group," said England forwards coach Graham Rowntree.

"He coped with the disappointment [of losing his place in the team] very well.

"There are a few guys we could give the captaincy to but we feel Dows is right for this game. This is a proper game, as intense and as big as a Six Nations game for us."

Former England captain Tindall, whose international career has stalled following last year's World Cup, will start at inside centre for the Baa-Baas.

Tindall was initially excluded from England's elite player squad and fined £25,000 by a Rugby Football Union panel last year over his controversial night out during the World Cup.

He was later reinstated and saw his fine reduced to £15,000 on appeal, but he has not featured for England since.

"I am sure Tins will be looking to get a few cheap shots on us," England full-back Ben Foden said. "He will be looking forward to coming here to Twickenham and sticking it to us.

"It will be good to see him playing and a good way to say goodbye as well - hopefully we will stuff them."