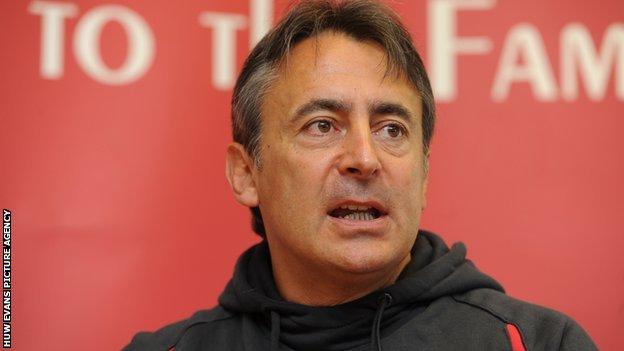 Former Wales and Llanelli centre Davies has been linked with succeeding Bryan Redpath at the Aviva Premiership club.

Davies succeeded Phil Davies as Scarlets head coach in May 2008.

"There is clearly a lot of speculation. I suppose it makes a change from speculation about players and finances," said chief executive Davies.

"Our values as a business are very clear. One of those values is very much respect and respect involves respecting the individual.

"The business perspective would be we are where we are and until anything changes that's where we are."

Davies, who won 29 Welsh caps at centre between 1988 and 1997, is believed to be on Gloucester's four-man shortlist.

"In any business, in any context, if you've got a team of people in the business then you seek to retain all of your talent," added Mark Davies.

"At the moment we are very happy with the coaching team that we've got for next year."

Wales wing George North says the Scarlets would have a big void to fill if Davies left the region.

North, 20, was handed his regional debut by Davies in 2010 and has since established himself in the Wales side.

"I think from the players' point of view we don't know what's going on really. Obviously there's a few big decisions for various people.

"For me he's been there since day one supporting me and giving a lot of support around the team.

"With the quality we have in the Scarlets at the moment it's a good place to be whether you're coaching or playing.

"All the players [will] come back after the break and look back on this season being a mixed bag and try and push on from there."