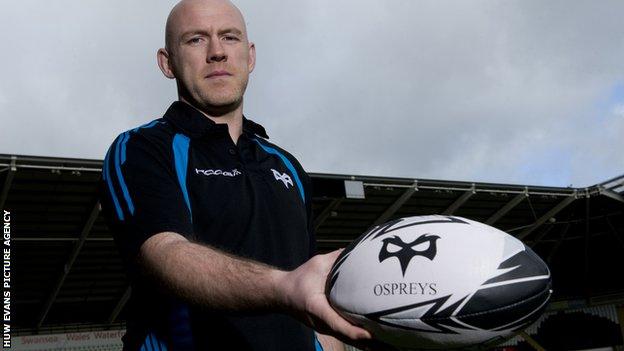 Coach Steve Tandy has paid tribute to his predecessors at the Ospreys ahead of his side's Pro12 final against the Heineken Cup winners Leinster.

"We cannot forget what Sean or Johno have done for us, " said Tandy.

"We were in second place [in the Pro12] when they did move on and we just needed to keep up the good work."

The Ospreys travel to Dublin to play Leinster, who have won the Heineken Cup in three of the last four seasons, at the RDS on Sunday.

Tandy was the surprise choice to succeed Johnson and Holley in February and he has admitted it has been a turbulent season at the Liberty Stadium.

While there may have been changes in the coaching set-up, the turnover of players leaving at the Ospreys has been even more dramatic.

Wing Shane Williams plays his last game for the region in the Pro12 final, Huw Bennett has signed for Lyon in France, Tommy Bowe has re-signed for Ulster, prop Paul James is off to Bath, Sonny Parker is moving to London Welsh, Tom Smith and Cai Griffiths have been signed by London Irish and Nikki Walker has joined Worcester Warriors.

But the Ospreys have also seen a host of new faces like wing Hanno Dirksen, centre Ashley Beck, flanker Justin Tipuric and scrum-half Rhys Webb rise through the ranks.

Tandy admits the Ospreys had been through a "turbulent time" after the loss of two coaches and with so many senior players leaving for pastures new.

"[Since Holley and Johnson's departure] the boys have gone on and played some really good football and we have a just reward with the final," he said.

"But we ain't won anything yet and hopefully we will be standing on the podium on Sunday."

Tandy believes lifting the Pro12 title in Leinster's backyard would be a "huge achievement" for his young Ospreys line-up.

The Ospreys face a Leinster side who last weekend beat Ulster 42-14 to be crowned kings of Europe for the second successive season knowing they will be viewed as underdogs in Dublin.

But Tandy is focussed on the challenge facing his young Ospreys side, who are going for their fourth Pro12 title, against a Leinster side chasing a European and domestic double.

"To win the Heineken Cup again and to win by that margin speaks volumes about them and their coaching team.

"They know how to win and won really well last weekend.

"You are always in a tough game with Leinster but we have to focus on our own game and putting in a real performance in."