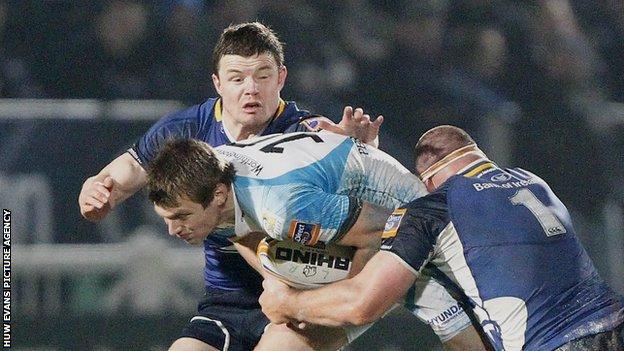 Leinster aim to add the cherry of the RaboDirect Pro12 title to the cake of the Heineken Cup they won so impressively at Twickenham last weekend.

Joe Schmidt's side claimed their third Heineken Cup victory in four seasons, seeing off Irish rivals Ulster in the final by a record margin of 42-14.

With that victory Leinster became just the second side to successfully defend European club rugby's highest prize, emulating the all-conquering Leicester team of 2001 and 2002.

Victory on home turf on Sunday would see Leinster become the first Celtic team to land a domestic and European double, and the first by any team since London Wasps in 2004.

Leinster's opponents on Sunday, Ospreys, are so often the Heineken Cup's nearly men and can only look on in envy at what their Irish rivals have achieved in that tournament.

But while Leinster have established themselves as the most feared side in European competition, in the rough and tumble of the Pro12 - formerly the Magners League and before that the Celtic League - they have often found themselves on the wrong end against Ospreys.

The RDS was also a happy hunting ground for Ospreys in 2010 when they beat Leinster 17-12 in the first Grand Final, when the competition organisers adopted end of season play-offs to decide the champions.

Leinster were league champions in 2002 and 2008, while Ospreys also won the Celtic crown in 2005 and 2007 and stand top of the winners list with Munster at three titles apiece.

That Leinster, who finished top of the Pro12 table after the regular season, have reached the final is no surprise. But for the Ospreys, who finished second, to be in the final as well is perhaps more of an eyebrow raiser.

Ospreys are a super team, I think the way they took Munster apart was not great to watch

Schmidt was named Pro12 Coach of the Year for this season, Sexton won the battle of the kickers to take home the Rhino Golden Boot award, while Leinster also picked up the Fair Play Award for fewest cards and citings. Full-back Kearney has also been named the European Player of the Year.

Ospreys, in contrast, are well past the point when they were being hailed (or sometimes teased) as the Welsh 'Galacticos'.

The Swansea-based region lost three British Lions at the end of last season, with James Hook, Lee Byrne and Mike Phillips all heading to France, while rookie coach Steve Tandy has held the reins since February after the departures of director of coaching Scott Johnson and coach Sean Holley.

"It's been a fantastic season for us, it's been turbulent along the way but we feel we've come out the right end of it," said Tandy, who also paid tribute to the work done by his predecessors.

"Thankfully now we've got a final to go and hopefully finish the season off really well.

"It was a turbulent time after Christmas but there's a lot of smiles on faces and it's a happy place to be."

Add to that the retirement of Wales record try-scorer Shane Williams and you would think that the Liberty Stadium cupboard is bare.

But if anyone thought Ospreys were a spent force, then their 45-10 semi-final demolition of Munster proved otherwise.

Into the breach has stepped wings Hanno Dirksen and Eli Walker, while ever-improving centre Ashley Beck is ready to shine wearing a Wales jersey this summer in the injury absence of the likes of Six Nations regulars Jamie Roberts and Jon Davies.

A youthful backline has been given direction by Dan Biggar, who has stopped blowing hot and cold and is now simply the hot property the Ospreys management always expected when installing him at fly-half ahead of the now departed Hook.

But while the backline is fresh and exciting, in the pack Ospreys are battle-hardened and grizzled - with the exception of open-side Justin Tipuric, a streetwise operator beyond his 22 years.

Packing down alongside him are the Jones boys - Ryan, Adam and captain Alun Wyn - plus Richard Hibbard, James and lock Ian Evans, who is realising his potential after several injury-wrecked seasons.

It was the pack that strangled the life out of an experienced Munster eight, albeit missing injured talisman Paul O'Connell.

That scoreline was equally impressive as Leinster's Heineken humbling of Ulster, but it also ensures that there will be no trace of complacency in the Leinster camp on Sunday, even leaving aside their hurt at losing to Munster in last season's Grand Final.

"We were a little bit disappointed last year that we missed out on chasing the double, so I think the players will have a bit of resolve to do that," said Schmidt.

"But I also think Ospreys are a super team, I think the way they took Munster apart was not great to watch [from a Leinster perspective] to be honest.

"I was hoping for [Munster coach] Tony McGahan's sake that things would go better for him on the way out and also that we would not have a team in such good form to play in the final."