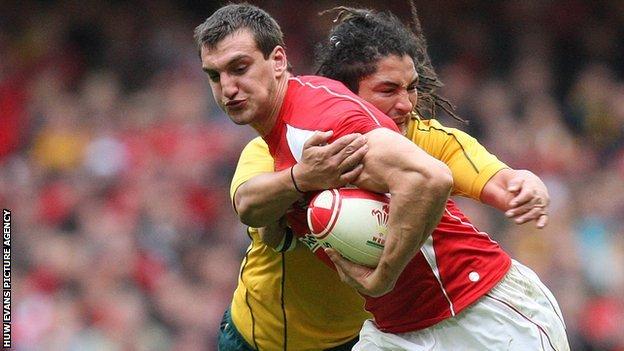 Sam Warburton says Grand Slam winners Wales will return from their three-Test June tour to Australia "disappointed" if they fail to win the series.

The Wales captain admits finishing fourth at the 2011 World Cup without beating a southern hemisphere power is a motivating factor.

Wales have not beaten Australia on Wallaby soil since 1969.

"It would be a disappointment if we came home not winning the Test series," Warburton told Scrum V.

"I'm not trying to put too much pressure on ourselves, but I think everyone will think of that because that's the natural competitiveness of the squad."

Warburton has returned to fitness after nerve damage to a shoulder cut his Six Nations involvement short.

He has not played since Wales won the Slam against France in March and faces a challenge from Osprey Justin Tipuric for the number seven jersey.

Warburton won global admiration for the manner of his leadership amid Wales' World Cup campaign, particulary for his reaction to being sent off in Wales' semi-final defeat by France.

Now, with the Wallabies in his sights - not to mention revenge over the Barbarians on his radar - Warburton believes achieving a historic Test series win down under would be "the next natural stepping stone" for Wales.

Asked about Wales' World Cup success coming without such a triumph, he replied: "Without being a pessimist I remember thinking that to myself after the World Cup.

"We still got fourth place, but we still hadn't beaten a southern hemisphere side.

[I've been hoping] to be the captain of a side to beat a southern hemisphere team, not just once, [but] to do it on a more regular basis

"So, like the great team of England of 2003, they went down there and beat all three of them and I think that really is what we should try and do... to get a series win is a massive target for us.

"Obviously we know it's not the best record against Australia or against any sort of southern hemisphere side.

"But hopefully that can change now.

"And I think we're all a pretty confident and excited bunch for this tour to Australia.

"Obviously [we're] very respectful that they are one of the best teams in the world, but that's exactly the challenge we want.

"A series win would be massive. As a captain that's a huge target to have a series win down there.

"Since I've had the captaincy, [I've been hoping] to be the captain of a side to beat a southern hemisphere team, not just once, [but] to do it on a more regular basis and that's why everybody's so motivated."

Wales face the Barbarians in Cardiff on 2 June with a largely second-string line-up expected to face the invitation club.

Warburton could be heading for Australia as one of 15 players being sent to acclimitise ahead of the 9 June Test opener against the Wallabies in Brisbane.

But having led Wales to defeat on his captaincy debut against the Barbarians in June, 2011, Warburton hopes whoever dons the Welsh jersey can triumph.

Four players will be cut from Wales' 38-man squad for duty down under after the Barbarians clash.

Watch the interview with Sam Warburton on Scrum V, Sunday, 27 May from 19:00 BST on BBC Two Wales.