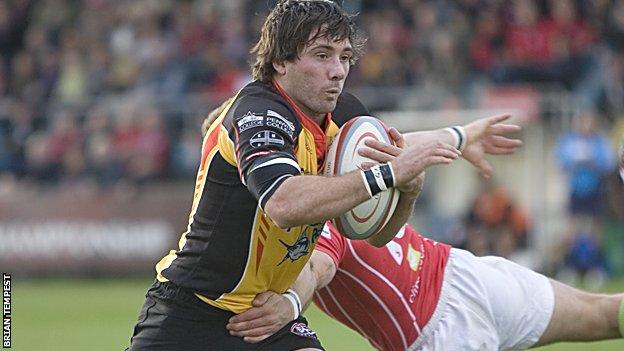 Cornish Pirates fly-half Jonny Bentley says he does not expect to play again until January next year.

The 25-year-old New Zealander played three games this season, in October and November, before injuring his Achilles tendon.

He had surgery on the problem earlier this year and will miss much of next season as a result.

"In the back of my mind I'm hoping late January if things go well," Bentley told BBC South West Sport.

"It's healing pretty well and I'm optimistic that it'll be a little bit sooner than that, but at the same time I realise I can't rush things."

Bentley missed the start of the season with an abductor injury having been a regular in the side in 2010-11.

He has managed to complete 80 minutes just once this season, in a try-scoring performance as the Pirates beat London Welsh in October.

"It's been a really frustrating season, the Achilles thing has been hanging around for quite a while and I tried all the conservative rehabs and nothing worked so surgery was really the last straw," added Bentley.

"It's frustrating, but i guess that's part of the game," he said.

The Pirates were beaten by London Welsh in the first leg of Wednesday's Championship play-off final, and even if they do turn around the 16-point deficit they will not be promoted as their ground does not meet Premiership standards.

And Bentley says he is hopeful that he can help the club get back to the Championship final in 2013, having signed a new deal last week.

"From a personal point of view I would want to play more of a part next year than I did this year," he added.

"The boys have done fantastically this season and it's just rewards that we're in the Championship final.

"We will lose a few key players and a few more will come in, but it will be a fresh challenge and one we all hope goes well."