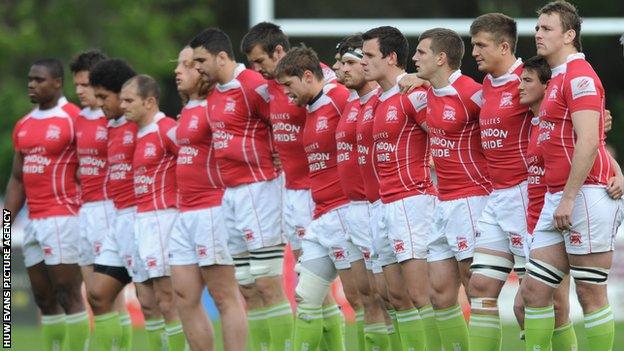 John Dawes has backed his London Welsh chairman to take the "ultimate" action in his club's attempt to be promoted to the Aviva Premiership.

Bleddyn Phillips, the London Welsh chairman, has threatened legal action to allow them to play in the English rugby's top tier.

"I think he will take it to the ultimate," said Dawes, the president of London Welsh.

The Richmond-based club have the upper hand in the Championship play-off final, having beaten Cornish Pirates 37-21 in the first leg.

There is something wrong somewhere. It seems the old adage with the RFU; why keep it simple, when you can complicate it!

However, unless they win an appeal, Newcastle will remain in the Premiership and no team will win promotion regardless of the result in the second leg on Wednesday.

Dawes, who is a legendary figure at Old Deer Park, captained the great London Welsh side of the 70s which included Mervyn Davies, JPR Williams, Gerald Davies and John Taylor.

Phillips, a lawyer by profession, has already admitted he is "exploring all possibilities" in relation to what action London Welsh will take if they are denied promotion.

"He will get a decision, one way or the other," said Dawes.

"If London Welsh win the next game, which they have to, and qualify by right, they get promoted.

"We are lucky we have a chairman with such resolve. We have fulfilled the playing conditions laid down by the RFU, we have won the division. If we win the play-offs we should be promoted.

"There shouldn't be any other silly reason not to be [promoted]."

An RFU report found that the Exiles had not satisfied the minimum standards criteria for entry into the top flight.

With their home ground Old Deer Park unsuitable to host Premiership matches, Welsh had submitted their plans for a ground-share with Oxford United to an independent audit.

Phillips claims the club have a legally-binding agreement to play in the 12,500-capacity Kassam Stadium if they get promoted.

Dawes admits his club's position has left him "dumbstruck and confused".

"If you get the results, it should be sufficient to seek promotion but it doesn't look that way," said Dawes.

"The criteria by which we can go into the Premiership, we have met, and I understand there are clubs already in that division who are in the same boat that we are.

"There is something wrong somewhere. It seems the old adage with the RFU; why keep it simple, when you can complicate it."

Other clubs in the Aviva Premiership share grounds with football clubs - London Irish with Reading, London Wasps with Wycombe Wanderers, Saracens with Watford.

Sale Sharks have shared Edgeley Park with Stockport County and will share with the Salford City Reds rugby league side from next season.

An RFU statement said that not having primacy of tenure at their chosen ground was one of "various failures" in Welsh's promotion bid.