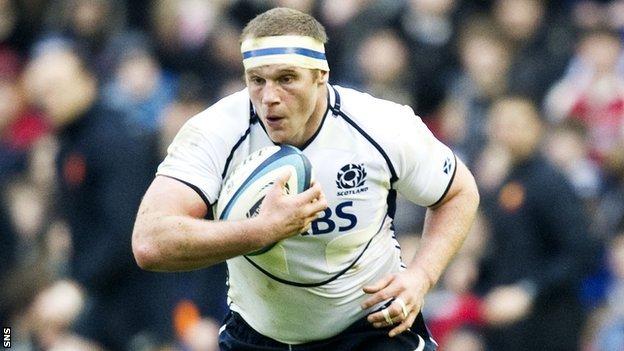 Prop Geoff Cross believes that if Scotland perform at their peak on their Australasian tour, it should be enough to claim three wins on the trot.

He is part of Andy Robinson's squad that will play Australia on 5 June, then take on Fiji 11 days later and Samoa on 23 June.

"If we can take the consistency we have shown in training into games, I believe we can beat anyone," said Cross, 29.

"If we play as well as we can, we can beat any team in world rugby."

Scotland are in need of a confidence boost in their tour. When they take on the Wallabies in Newcastle they will be looking to end a seven-match losing run.

Their first failure to qualify for the World Cup quarter-finals was followed by a dismal Six Nations from which they emerged with the wooden spoon.

Yet in club rugby, Scotland's two professional sides performed well in the season that has just ended.

Cross's Edinburgh reached the Heineken Cup semi-finals while Glasgow made it to the RaboDirect Pro12 play-offs but lost to Leinster.

"I think this is going to be a really exciting tour, something we can enjoy," said Cross, who grew up in Galashiels.

"I believe there is the very real possibility that if we play as we can then it can be three wins from three and we are preparing for that.

"The challenge for us is to play as well as we can consistently.

"We haven't done that in the past and that's why we haven't been winning the games that we've lost."

After the match in New South Wales, the Scots travel to play Fiji in Lautoka and end the tour in Apia where they will play the Samoans, 10th in the International Rugby Board world rankings, two above Robinson's men.

Scotland's previous summer tour resulted in Robinson's best times in the job, winning both matches in Argentina. Cross was part of that squad and is looking forward to the challenge of repeating that success.

"I believe winning comes from performing basic skills consistently under pressure," he said.

"We did that out there and it showed we can win against world-class opposition. The Argentinians are a very good rugby team and are improving.

"We have been out there on our previous southern hemisphere tour and got our first series victory down there.

"Because you travel away so far from home and you're together for such a long time, it is a great chance to spend time with the guys and build relationships on and off the pitch so you can facilitate your performance for Scotland.

"But there are games to win and we're professional rugby players and that's the first mandate in the job description."