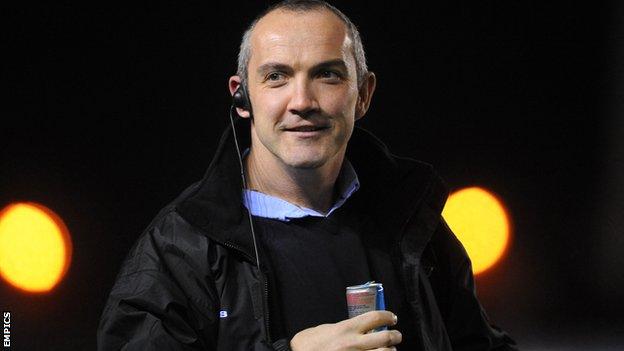 Harlequins director of rugby Conor O'Shea paid tribute to his side's team spirit in the aftermath of the club's first ever English club title.

Quins overcame the Tigers 30-23 in the Premiership final at Twickenham.

The win completed a remarkable turnaround under O'Shea, just three years after the club was embroiled in the infamous "Bloodgate" scandal.

"A lot of people went through a lot of tough times with the club," the ex-Ireland full-back told BBC Sport.

O'Shea was glowing in his appraisal of winger Tom Williams, the player at the centre of the scandal, whose opening try set Quins on their way to triumph.

"He took a lot of stick but he pulled together with Mike Brown and Ugo Monye and he has helped bring some of the younger players on," said O'Shea.

And Quins' leader was also generous in his assessment of the club's most recent wayward son, scrum-half Danny Care.

The England man, who endured a wretched season of off-field scandals that culminated in being dropped from Stuart Lancaster's squad, was back to his best with a classy performance of high-tempo half-back play.

"I thought he was incredible today, he was buzzing around and creating space," O'Shea continued.

"He'll be the first to admit he made mistakes, he's a young man, but he'll learn from that and we all grow as people at the club - the fact is young men make mistakes.

"But as long as we've got people like Chris Robshaw and the whole group of players to support each other and to make him better [we'll be OK].

"He's only 25 and hopefully he'll repay the faith that people in Harlequins and the England set up have shown him."

But it was for his skipper Chris Robshaw, whose second-half try gave Quins a commanding 12-point second half lead that they never relinquished, that O'Shea reserved his highest praise.

"Chris epitomises what the club is about in terms of work and structures. He doesn't get ahead of himself he's ultra competitive," O'Shea added.

"He was disappointed with the World Cup but now he can look forward to a nice holiday to South Africa."

Robshaw has enjoyed a memorable season that has seen him secure the England captaincy and lead them through a successful Six Nations campaign, and now guide his club to their maiden title.

"It's been an incredible year and I've loved every moment of it but it's not about me, it's about the club and everyone in it, I've been surrounded by some great players," the Premiership player of the year said.

"That squad has allowed me to play but it's more than that. It's also the fans who produced a guard of honour on the way to the stadium - that was quite emotional for me and the players.

"This Quins side is about everyone doing their job on the day and today we did that. We'll have a rest over the summer and come back stronger next season."

And despite reaching one of the most significant milestones in his own career and the club's history a clearly contented O'Shea could not allow himself to break from his mantra about building a legacy.

"Good teams win, great teams can kick and do it again," he smiled.