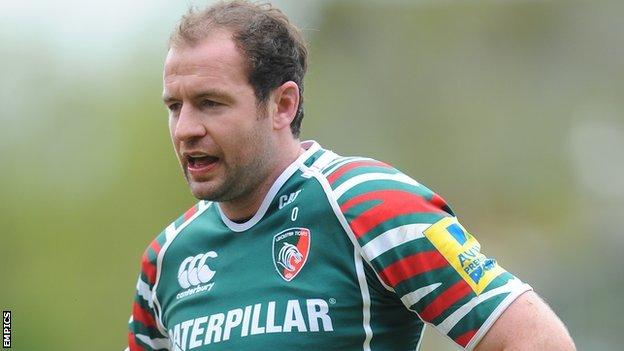 Tigers suffered a 30-23 reverse by Harlequins, and Murphy's side were made to pay for handling errors, as Quins notched their first-ever title.

The 34-year-old Irishman told BBC Sport: "They held up the ball and it went down to the wire.

"But we made some uncharacteristic mistakes - forward passes and knock-ons that we haven't done before."

Murphy, whose side failed for a second successive year to secure the Premiership crown, continued: "Maybe it was the pressure of the big occasion.

"But in the end it didn't happen for us, and we didn't have a whole lot left in the tank."

Tigers, who were appearing in an eighth consecutive Premiership final, endured a dominant Quins' display in the opening 25 minutes, but fought back to go in just one point adrift at half-time.

And a rousing finale was ensured following George Ford's try and a brace of penalties, leaving Leicester with a line-out just yards from the Quins line, with just 50 seconds left on the clock.

But the Tigers could not take their chance, conceding a penalty to hand the win to Quins.

"Sometimes you try and play your game, and you try to force the play a bit."

He continued: "In the end, over the course of the game they probably played better than we did."

Cockerill also refused to blame the defeat on Thomas Waldrom's controversial yellow card at the end of the first half for killing the ball at a ruck.

"[Having 14 men] certainly affected the result, but that wasn't it," Cockerill said.

"I'm not going to say it's OK to come to finals and lose them because it's not."

"We didn't play as we should have. In the end their play deserved it [the win]. The referee refereed us harder than them because they had the ball most of the time."

But Murphy felt decisions cost his side - in particular the decision to penalise the Tigers' number 8.

"I didn't feel it should have been a penalty let alone a sin-binning," he said.

Murphy and Cockerill are now left to reflect on a Tigers side that have managed to convert just two of their last eight Twickenham final appearances into wins.

And the Leicester boss was in no mood to make excuses for the side's defeat.

"We came here to win. We didn't and that's disappointing," he concluded. "I'm not going to say it's OK to come to finals and lose them because it's not."