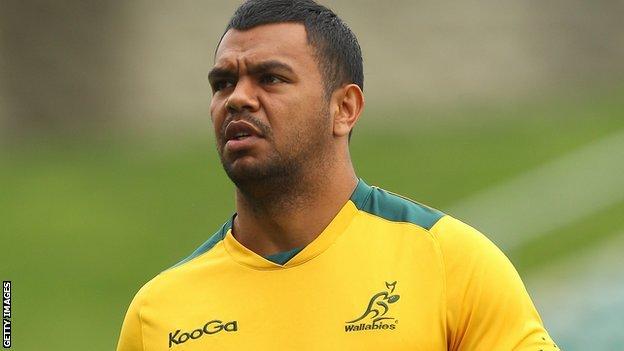 Australia's Kurtley Beale will miss the June Test against Scotland, but may be fit to play in up to two of three Tests against Wales.

The star back had shoulder surgery after being injured for the Melbourne Rebels against Wellington on Saturday.

But after initially fearing Beale would miss all four June Tests, he has been included in their training squad.

A Wallabies spokesman said: "He [Beale] could come back in time to be involved in the Wales series."

However, Australia skipper and lock James Horwill will miss the Scotland and Wales games because of a torn hamstring.

Quade Cooper, who suffered a knee injury at last year's World Cup, is included in the 38-man squad after only 120 minutes of Queensland Reds Super 15 action since his recovery.

Beale's fellow Melbourne Rebel and another recent convert to the number 10 jersey James O'Connor recovering from a lacerated liver, another factor that prompted coach Robbie Deans to include Cooper so soon after his return.

James Horwill, we are presuming, is out for the whole of June but it is not as bad as it first looked. It looked pretty sinister at the time

Horwill's absence will force the Wallabies to name a new captain for the match against the Scots in Newcastle before the first of three Tests against Six Nations champions Wales.

The lock, who suffered his injury in Queensland Reds' win over ACT Brumbies on Saturday, joined Deans' squad and had a scan on Monday.

"James, we are presuming, is out for the whole of June but it is not as bad as it first looked. It looked pretty sinister at the time," said Deans.

With a final round of Super Rugby games to be played before the international break, Deans will name his team on Sunday for the Scotland Test on Tuesday, 5 June.

Deans thanked the Australian clubs for their assistance in releasing players, before admitting that such a short turnaround from selection to the game against the Scots was not ideal.

"The co-operation of the franchises has been considerable and we appreciate that," said Deans.

Wales have named a 38-man training squad for the clash with the Barbarians on 2 June at the Millennium Stadium and for the three Tests against the Wallabies on 9, 16 and 23 June, in Brisbane, Melbourne and Sydney respectively.