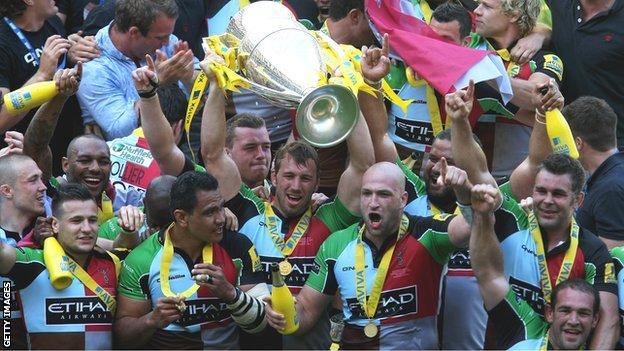 When Harlequins director of rugby Conor O'Shea arrived at The Stoop in late 2009 he found what he described as "a club in mourning".

At the time the Quins were depressed and despised following one of sport's most unholy scandals - the infamous "Bloodgate" affair.

The fallout from the episode was as damaging as it was wide-reaching.

It led to the resignation and subsequent ban of director of rugby Dean Richards from the sport for three years, a ban for the player at the centre of the scandal, Tom Williams, the resignation of chairman Charles Jillings and the dismissal of physio Steph Brennan and club doctor Wendy Chapman for their roles in the affair.

But after leading what was effectively a club wake shortly his arrival O'Shea has overseen a sporting resurrection of Lazarus-like proportions.

Eight of the players who lifted the Premiership trophy on Saturday were in the Quins squad for that fateful Heineken Cup quarter-final in April 2009 and O'Shea was gracious enough to acknowledge the role Richards had played in laying the foundations for their historic win.

"A couple of years ago this team said it wanted to create a different chapter in Quins history," the genial Irishman said after Quins had claimed their maiden English title in their first ever Premiership final.

How Quins learned from defeat

"It is a massive tribute to Dean, for putting so many of the structures in place, and a lot of people at the club, including the owners."

Nick Easter was one of the eight involved in the Bloodgate game and, in the afterglow of their most famous win at a balmy Twickenham, was delighted to have laid Quins's ghosts to rest.

"It's a full turnaround, it's a rollercoaster ride that no other club has had in the professional era anywhere in the world," the number eight said.

"I've been at the club eight years, some guys like Ugo Monye have been here 10 years and others have grown up together at the club. It's been a special season from start to finish."

After leading the Premiership for more than eight months, Harlequins seized the title with the sumptuous style of high-tempo off-loading rugby that characterised their campaign.

But the so-called fancy dans have added genuine steel in their tight five.

"We've got a huge balance to our game now, we're more calculated in the offloads we make but it's in our heritage," said skipper Chris Robshaw as he signed off a stellar season for club and country.

"We have a scrum now and a mauling game, and it's about having team balance and being able to mix it up."

"We were convinced we could hold out, we've proved ourselves at Munster, against Saracens at Wembley and in Toulouse," Easter added.

"That's a credit to everyone at the club, people behind the scenes and although this shouldn't be the peak of it we want to push on and we definitely don't want to be flash in the pans."

After finishing eighth at the end of O'Shea's first campaign at the helm the Londoners could only climb one place last season.

But the green shoots of recovery were showing as they claimed more losing bonus points and made more clean breaks than any other side in the Premiership.

And Quins illustrated their promise when they beat Stade Francais in the Challenge Cup final in Cardiff last May.

"Winning the Amlin [Cup] meant a lot to this group, winning that European silverware gave the players the belief and especially the manner that they won it in," said O'Shea.

That confidence saw Quins through a number of key victories this season, not all in the Premiership, and prepared them for the late Leicester onslaught on Saturday.

"That's a credit to everyone at the club, people behind the scenes and although this shouldn't be the peak of it we want to push on and we definitely don't want to be flash in the pans."

O'Shea has adopted the mantra that his tight-knit Quins family are now on a journey together in pursuit of a legacy.

In the hours after the final whistle several hundred Quins fans made the short hop across the Chertsey Road from Twickenham to their Stoop home where they gathered to celebrate their collective re-birth.

And the head-wetting continued well into the night.