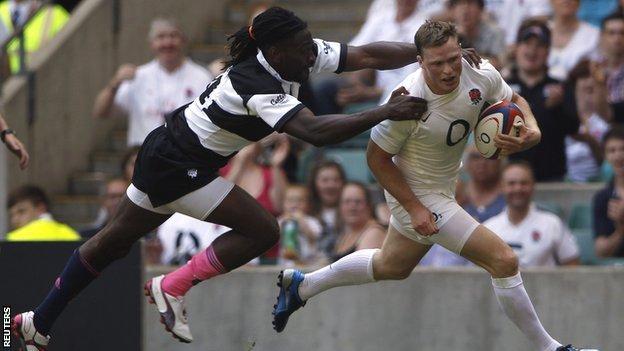 Chris Ashton scored a hat-trick as England thrashed the Barbarians in a non-cap game at Twickenham.

Two tries from Ashton and a further score to Dylan Hartley helped England into a 22-7 half-time lead, with Mils Muliaina crossing for the Baa-Baas.

A final flurry saw Mike Tindall and Pelu Taele score for the Baa-Baas, with Richard Wigglesworth and Jonathan Joseph - twice - replying for England.

It was a satisfying warm-up for England ahead of their summer tour to South Africa, although coach Stuart Lancaster will be all too aware that the Springboks will present a far more physical challenge over the next few weeks.

England went into the game at a sun-soaked Twickenham unable to select any of their 18 squad members who featured in Saturday's Premiership final, which saw Harlequins beat Leicester to become English champions for the first time.

The backline was recognisable, bar the inclusion of exciting young winger Wade, and the front five had a host of familiar names, but the rejigged back row of Tom Johnson, Carl Fearns and Phil Dowson meant this was far from a first-choice XV.

The normally reliable boot of Owen Farrell gave England the early lead and although he soon missed a simple chance to double the advantage with a terrible mis-hit, England were quick to secure their first try.

Ashton took a beautifully disguised reverse pass from scrum-half Lee Dickson to slice through a gap by the ruck and cross untouched under the posts.

The Barbarians hit back when ex-England full-back Iain Balshaw chipped ahead and veteran former All Black Muliaina showed he has still has fine footwork and decent acceleration as he made the line in heavy traffic.

Stephen Donald - the man who kicked the points that secured the World Cup for New Zealand - added the conversion and with half-time approaching it looked as though England would not have the lead their control deserved.

But hooker Hartley - back in action after an eight week ban for biting - had other ideas, first finishing off a line-out drive and then breaking through to create a second try for Ashton.

The winger completed his hat-trick soon after the interval and Farrell, who had a mixed day both with the boot and his all-round play, added a couple of conversions to make it 29-7 with over half an hour to play.

Muliaina profited from fine work from fellow New Zealander Casey Laulala to score his second before England emptied their bench to give youngsters such as Joseph and Joe Launchbury their first taste of the big time.

Wade scored the first of what might be many tries in an England shirt after classy play from captain Phil Dowson, Farrell converting, and there was still time for five more scores.

Former England captain Tindall powered over for a converted try but England added converted scores from replacements Wigglesworth and Joseph to bring up their fifty.

There was a worrying sight as Dowson was taken off on a stretcher, while the Barbarians completed their scoring as Samoa lock Taele went over.

But the final word went to England, with exciting young flyers Wade and Joseph combining for the latter to collect the last try of the game.

"I am pleased for Chris that he has got the three tries. His work rate off the ball is tremendous. Sometimes he can work and not get the off-loads but today he did and it is great.

"Credit to him for working hard and getting the rewards.

"As a team we recognise areas we still want to improve and tighten up on but overall he and others did well. I am pleased."