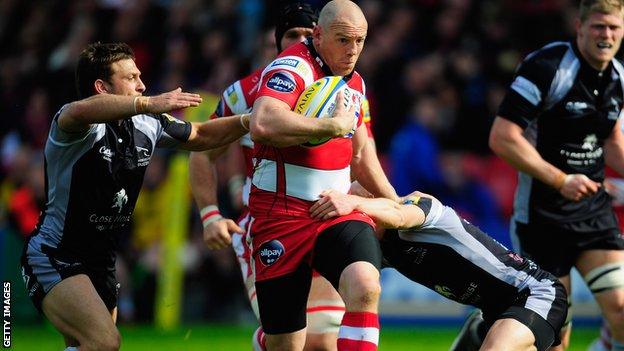 Mike Tindall has revealed he would like to make a return to Gloucester.

The 33-year-old centre found himself out of contract at Kingsholm at the end of the season but has failed to agree a move elsewhere.

And the former England captain admits he would consider re-signing under the club's new coaching set-up, which has yet to be installed.

"I would like to have another chance at Gloucester but that's down to the new coach that comes in," he said.

"I definitely still want to play but it's about making the right decision."

Gloucester have been searching for a new head coach since the departure of Bryan Redpath last month.

Scarlets boss Nigel Davis has been heavily linked with the position but the Premiership outfit have yet to confirm their new backroom staff.

Tindall, who is married to the Queen's grand-daughter Zara Phillips, has been with Gloucester since 2005 but was one of five players deemed surplus to requirements under Redpath, who had already drafted in six new squad members for next season before his resignation.

Tindall has been out of the England reckoning after last year's World Cup and he had been linked with a move to France to play at club level.

He says he has considered a move abroad and has also had offers from English clubs, although he hinted they were only short-term contacts.

"I'm still trying to sort it out," he continued. "There's things there but I need to make the right decision.

"Because I've done eight and seven years at Bath and Gloucester respectively it makes it hard to go to one club for one year. That's why I was looking further afield.

"But it's not just about me - it's about the family as well."