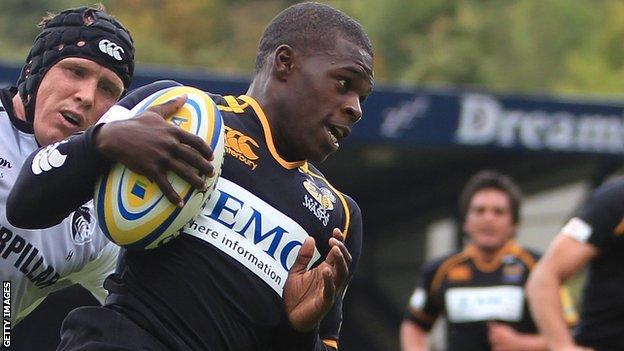 Winger Christian Wade has signed a contract extension with Wasps that keeps him at Adams Park until 2015.

The 21-year-old has enjoyed a breakthrough season culminating in his try-scoring debut for England against the Barbarians on Sunday.

Wade was injured for three months but ended up the second-highest scorer in the Premiership with 13 touchdowns.

"Wasps have been my only club and I'm looking forward to the next few years here," he said.

"I've learned an awful lot this season and I'm excited about the squad we've got for next year where hopefully we can push on and improve on the pitch."

The England Sevens man made a big impression last summer with England's Under-20s at the Junior World Championships.

He took that form into the Premiership campaign, making an explosive start, and finished with a 65-point haul from 20 games.

After a torrid season for the former Heineken Cup and Premiership winners, which saw them in a relegation decider with Newcastle in the final day, Wade's deal will be a big lift as Wasps prepare for the next campaign.

Director of rugby Dai Young said: "Christian is a special talent and he has been outstanding for us this season.

"As a young player he still has plenty to learn and he has a real appetite for continuing to develop and improve himself.

"We've got a great core of young English players emerging here who are only going to get better and better and it's great to get these guys committing their long-term futures to the club."