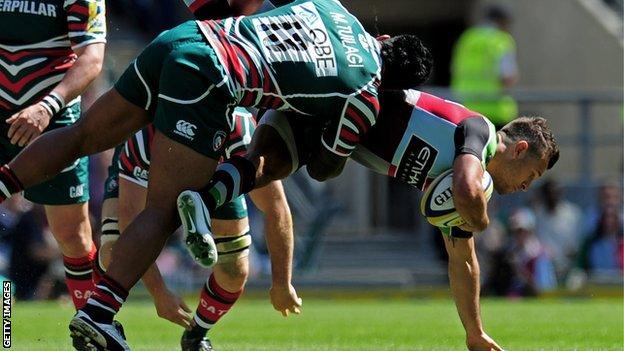 England and Leicester centre Manu Tuilagi has had his citing over a dangerous 'tip' tackle on Harlequins' Danny Care in Saturday's Premiership final dismissed.

The two-hour case was heard by an RFU panel in Bristol on Tuesday.

The 21-year-old is now free to meet up with the England squad ahead of Wednesday's trip to South Africa.

The tackle occurred early in the final and Tuilagi was originally charged with a breach of law 10.4.

Many who watched the incident at Twickenham will find the ruling rather controversial, when it is well known the IRB has demanded of all referees zero tolerance on dangerous tackles. Tuilagi will be a very relieved man

The powerful Samoan-born back had been reported by citing officer John Byett and would have faced a minimum three-week suspension if he had been found guilty, which would have ruled him put of the southern hemisphere tour.

But the disciplinary panel - Christopher Quinlan QC, Dan White and Nick Dark - was "not satisfied" that the referee had made a mistake in not sending off Tuilagi in the Premiership fixture.

The decision means Tuilagi will fly out to South Africa with the rest of the England squad on Wednesday and is eligible for selection in the three fixtures scheduled against South Africa in June in Durban, Johannesburg and Port Elizabeth.

Tuilagi, who exploded onto the English rugby scene last season and has 10 caps for England, has suffered a number of disciplinary setbacks over the past 12 months.

He was fined for jumping off a ferry in Auckland harbour last October after England were knocked out of the World Cup in New Zealand.

Last May Tuilagi missed Leicester's previous Premiership final against Saracens because of a ban after he punched Northampton and England wing Chris Ashton in the semi-final at Welford Road.