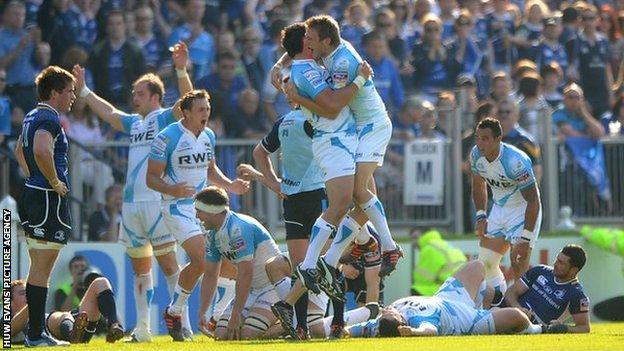 Ospreys' dramatic Pro12 Grand Final win against Leinster on Sunday provided a much-needed boost to the regional game in Wales.

The international side appears to be in rude health at the moment, with Wales claiming a fourth place at the 2011 World Cup and a Grand Slam in this season's Six Nations.

But on the domestic front there has largely been doom and gloom amongst Wales' four regions, Ospreys, Cardiff Blues, Scarlets and Newport Gwent Dragons.

Falling crowd numbers and financial concerns exacerbated by the recession have seen a self-imposed salary cap put in place for next season, while the day after their Dublin triumph Ospreys had a winding-up order postponed for two months over an unpaid tax bill.

That has had a knock-on effect on player recruitment and there has been a steady stream of playing talent departing to richer English and French clubs, and it seems that coaches are also juicy targets.

But most keenly felt will be the loss of wing Shane Williams - because of old age rather than bold agents - Wales' record try scorer who signed off his Ospreys career on Sunday in typical style, just as he had his Wales one.

The 35-year-old wing had already claimed one try to keep his side snapping at the heels of Heineken Cup champions Leinster, before shoving, turning and twisting his way past Jonny Sexton and Rob Kearney for a dramatic late score.

That brought Ospreys to within a point and up stepped fly-half Dan Biggar, tasked with the responsibility of taking a conversion that would seal the Welsh side's record fourth league crown.

The ball was placed tight to the right touchline, the worst possible angle for a right-footed kicker, but from the moment it left Biggar's boot there was never a doubt it was heading sweetly between the posts.

While the crown jewels may continue to depart for the foreseeable future, it seems the Ospreys academy in Llandarcy is busy unearthing diamonds in the rough to fill the senior ranks.

Biggar was born five miles up the road from where the Liberty Stadium stands, in the Swansea suburb of Morriston, while his fellow 22-year-old Ashley Beck hails from just a little further on in Neath.

The centre began Ospreys' fightback with an excellent try, finding the acute angle of attack that ruptured Leinster's defensive line and Beck should cap a memorable week with his Wales debut against the Barbarians on Saturday.

Why can't we do it in Europe against sides probably that aren't as good as Leinster?

Biggar is likely to be alongside his regional colleague in the red of his country, after a second half to the season in which he has established himself as one of the best 10s in the Pro12.

He may have to share the 80 minutes with erstwhile Ospreys rival Hook, now with Perpignan, but Biggar is better now than when he won any of his previous nine caps.

Another 22-year-old discovery from Neath is open-side Justin Tipuric, whose battle with opposite Leinster number Shane Jennings - in for the injured Sean O'Brien - was a compelling sub-plot in the unfolding drama at the RDS.

Tipuric has so far won just four caps, thanks mainly to the form of Wales captain Sam Warburton, but there is less and less to choose between the two sevens.

Add to that the likes of scrum-half Rhys Webb, 23, and wing Hanno Dirksen, 21, and the Ospreys have a youthful core that should serve them well for seasons to come.

Leinster have graced Europe as champions three times in the past four years, yet Ospreys beat them in all three meetings this season and also upset the odds two years ago in the first play-off final at the RDS.

A thought must be spared for the Irish province, no slouches at producing home-grown talent themselves, who continue to entertain us royally.

But two major finals in eight days proved too much and Leinster's vision of a domestic and European double must go on ice for another season, after another painful collision with Ospreys left them blinking in disbelief.

So the question that remains, the one which Williams will always puzzle over in his retirement, is why Heineken Cup success has eluded Ospreys when they have shown they can beat the best in Europe?

"I would have loved to have been successful with the Ospreys in the Heineken Cup," Williams said.

"We've had our chances, we got in good positions and been the best side on the field in quarter-finals and lost.

"That is something that's eluded me so it's a little bit frustrating because I've said year in, year out we've got the squad that's good enough to compete.

"We've got a team and a squad good enough to come to the RDS, beat probably one of the best sides in Europe there's ever been.

"So why can't we do it in Europe against sides probably that aren't as good as Leinster? I don't know how to answer that."

Ospreys are not alone in their Heineken frustrations, with the other regions sharing in the general Welsh malaise in that competition.

Cardiff Blues - this season's only Welsh quarter-finalists - proved they can live with the big spenders by besting Toulon in the 2010 Amlin Challenge Cup final but find Heineken Cup glory elusive, while Scarlets have also occasionally flirted with the semi-finals.

But Williams believes the future looks bright as he moves into the background at Ospreys, where from time to time he may lend his experience to rookie coach Steve Tandy.

Former flanker Tandy stepped bravely, and it seems brilliantly, into the breach last February when director of rugby Scott Johnson and head coach Sean Holley departed and the 32-year-old has played as full a part as any of his players.

"I believe that we have got strength in depth in this squad now that can move on," Williams added.

"We certainly have got players that can compete in the Heineken Cup.