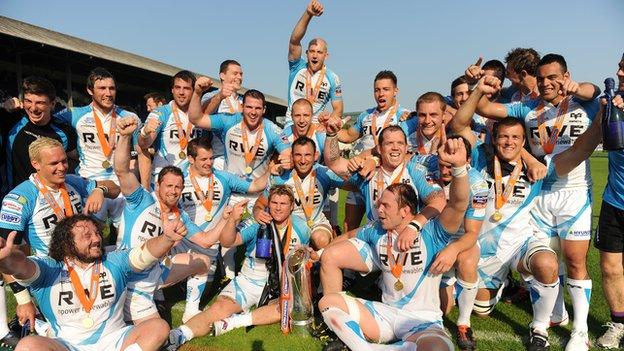 Wales' kicking coach says the region's Wales squad players are "bouncing and happy" ahead of Saturday's clash against the Barbarians and three-Tests on tour in Australia that follow.

"It's a fantastic achievement and certainly gives us a boost," he said.

Fly-half Biggar, who has been subjected to boos from his own fans this season, converted Shane Williams' late try from the right touchline to seal a one-point victory in Dublin.

"It was a fantastic game - I really enjoyed the game, obviously probably more for the winning kick off the touchline by Biggs [Biggar]," added Jenkins, the former Wales fly-half and ex-world record points scorer.

"He would have probably left me behind a long time ago.

"I think it's all down to Dan… it's what he's done and what he goes through year in, year out, really.

"Again, if anyone had seen the amount of work he puts in from pre-season, to obviously the game that finished on Sunday... [and he's been] back at it today, two days later.

"So it speaks volumes for Dan and what he's about, really and if someone deserved it, he certainly did."

Biggar's kick proved the difference in a 31-30 triumph for Ospreys against the Heineken Cup winners in their own back yard.

Jenkins added: "We want our regions to do well and for one of them to be in the final and actually beat the European champions on their own patch, I think that says it all, really.

"The Ospreys did it a couple of years ago and have achieved it again on Sunday and it's a fantastic achievement and certainly gives us a boost.

"The players have had a pretty good year themselves in the national set-up with the World Cup and obviously the Six Nations.

"And for them to be the Pro12 champions as well, it's only going to have a knock-on effect and have a positive one and the boys coming in - they're all bouncing and happy.

"Obviously there is a little bit of tiredness in them from the game itself.

"But other than that I think they're looking forward to the next month and you never seem to feel tired when you're winning."

Wales have not beaten Australia on Wallaby soild since 1969.

Before leaving on tour, they face the Barbarians in Cardiff with a largely second-string line-up expected to face the invitation club.

A 15-strong party will head to Australia prior to facing the Baa-Baas, who will field their own Welsh players in Shane Williams and Duncan Jones at the Millennium Stadium.

Four players will be cut from the rest of Wales' 38-man squad for duty down under after the game.