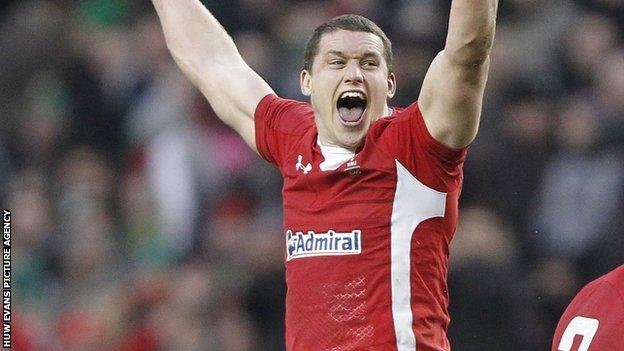 Ian Evans "will take it on the chin" if his wedding-enforced-absence from Wales' first Test against Australia on 9 June boosts his rivals' Test claims.

Evans' wedding date was set for next week more than a year ago when the lock was out of the Wales reckoning following a series of injuries.

He said: "If everything does go well for the team in the first Test, and I hope it does, then I can fully understand the situation.

"I will have to take it on the chin."

Evans will delay his honeymoon to join the Wales squad down under and will be in contention for the second Test in Melbourne on 16 June.

Fellow Osprey Alun Wyn Jones could also miss the first Test as he attends his sister's wedding ahead of Wales' clash against the Barbarians in Cardiff on Saturday.

Jones and Evans' wedding commitments mean they are likely to line up against the Baa-Baas, with Bradley Davies expected to return alongside Luke Charteris to take on the Wallabies.

After a promising start, Evans' career was hit by serious knee and shoulder injuries that stymied his progress.

But he fought back to fitness and form ahead of the Six Nations in which he played an impressive part in Wales' Grand Slam.

He added: "At the time we chose the wedding date, I was just getting back into it with the Ospreys after injury.

"A lot of things have changed from January onwards, really, which have been really positive in my rugby career.

"It has all been a bit of a whirlwind. If you had said to me at the start of this season how it would end, I would have laughed at you.

"I've had a bit of luck, which everyone needs, and things have progressed really well. It has been a little overwhelming, really.

"I have proved to myself that if I get the game-time under my belt then I can keep on progressing.

"I can accept that it could be tough to get back in the team.

"Once you get your chance, you have got to take it, and if I am lucky enough to get another chance then the responsibility falls on my shoulders."