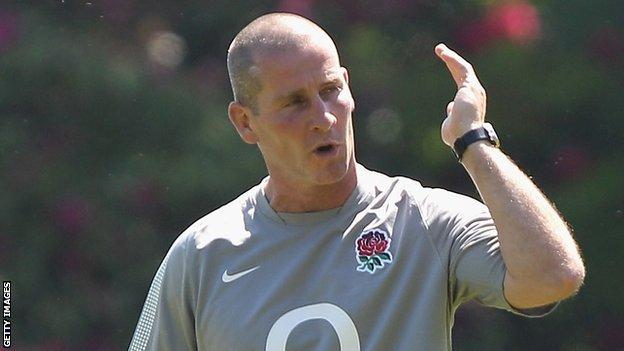 Coach Stuart Lancaster has told England players that he will not tolerate a repeat of the off-field problems that marred their World Cup campaign.

Lancaster and his players departed on Wednesday night for their tour of South Africa, which is England's first trip abroad since the World Cup.

He said: "There have been quite a few players involved in incidents.

"All of them were nodding their heads in agreement when I said we don't want to have any off-field distractions."

We can ill afford to lose players through injuries, suspensions, citings, sin-binnings and giving penalties away

The England coach has taken his 42-man squad through their code of conduct and reinforced his message by showing them newspaper headlines on their World Cup controversies.

Lancaster sought to improve discipline when he took over from former manager Martin Johnson ahead of the Six Nations. But he has not set any specific curfews on his players during the five-match, three-Test South Africa tour.

"I am not going to say we are not going out ever," said the England coach. "There will be parameters and guidelines. There is a code of conduct in place."

England football manager Roy Hodgson recently used the national rugby team's problems as a warning to his own players ahead of Euro 2012.

Lancaster admitted: "It's not great to be used as examples of not what to do. Having said that, I used the same examples in the talk to my players.

"I said this is where we were six months ago, these were the headlines, this is the perception and this was how we were viewed as the England rugby team."

On-pitch discipline will also be a priority for Lancaster, who has spoken to Manu Tuilagi about his tackling style.

The Leicester centre avoided being suspended from England's tour of South Africa after being cited for a tip-tackle on scrum-half Danny Care in his side's Premiership final defeat against Harlequins on Saturday.

He was cleared at a disciplinary hearing on Tuesday after lawyers proved that Care's knee had hit the ground before his torso.

At the World Cup, Tuilagi also had off-field problems, being formally warned by police and fined for jumping from a ferry in Auckland.

But Lancaster said: "I had spoken to him at the start of the Six Nations. It was a case of me getting to know him better.

Manu Tuilagi was charged with a breach of law 10.4, for his controversial tackle on Danny Care, and would have faced a minimum three-week suspension if he had been found guilty.

"It was on Monday evening that I last met him. I meet every player one-to-one at the start of every campaign.

"I had a good conversation with Manu on the strengths of his game and the areas we need to make sure he is on top of. Part of that is tackle technique and discipline. He understands that. He is a young player and still getting experience.

"As a young player, we all make mistakes and I think genuinely he is working in the right direction and he is a huge talent."