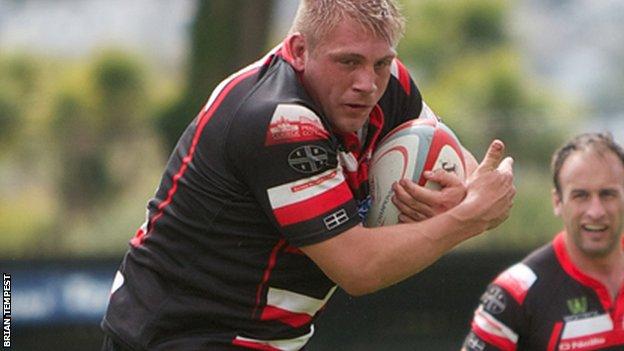 The 26-year-old, named Pirates Player's Player of the Year this season, has been a key member of the Penzance-based side that reached the Championship play-off final.

Rimmer is the eighth new player to join the Chiefs over the summer.

And he said: "It's a chance to play in the Premiership, so it was a bit of a no-brainer in terms of my decision."

Chiefs boss Rob Baxter said Rimmer had "come through very strong" in the final part of the season and continued: "We think he's got the raw materials for us to work with."

Rimmer has played 90 matches for the Pirates since moving to Cornwall from Coventry in 2009.

He appeared 23 times for the club this season, scoring twice in the earlier this month.

"Rob's call came quite late in the season, but there was never any doubt in my mind about anything when it came along - I ripped his hand off," he said.

"Being at the Pirates, I've seen people I've played with go onwards and it's made me realise that, while team-wise there's a huge step between Championship and Premiership clubs, individually the difference can be minute," he added.

But Baxter says Rimmer must strive to improve once he arrives at Sandy Park.

"We're going to expect him to thrive and take every opportunity that comes along from being involved with a Premiership club, just like a lot of our guys who stepped up from the Championship with us.

"He can't come to us and stand still, he needs to come to us and do what our other guys have done and not sit down and watch it happen around him," he added.

"It's a good challenge for him but I think he's got all the raw materials so the ball's in his court. We'll obviously work very hard with him, but he's got to come here determined to make the step up."