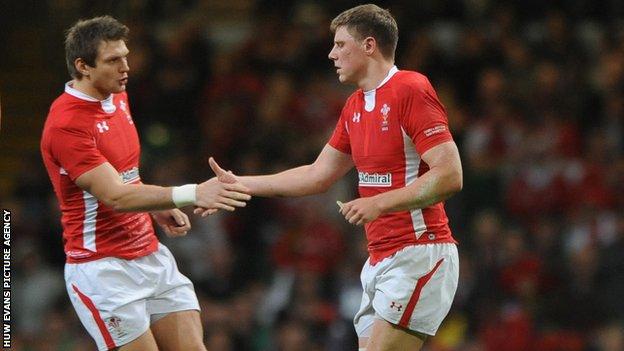 Dan Biggar is determined to make the most of his return to the Wales squad and pledged to push Rhys Priestland all the way for the number 10 jersey.

The Ospreys fly-half has been named in the side to face the Barbarians at the Millennium Stadium.

"We know where we are in the pecking order and it is about trying to change that pecking order," said Biggar.

Priestland is one of 16 frontline players who will fly out ahead of Wales's first Test against Australia.

Perpignan fly-half James Hook lines up at centre against the Baa-Baas, but is also a fly-half contender.

Biggar landed the winning conversion to clinch the Ospreys the Pro12 title in their 31-30 victory over Leinster in Dublin.

The 22-year-old won the last of nine Wales caps against Australia in December, returning to Test duty after a 12-month absence that included missing the 2011 World Cup.

Biggar also missed out on Wales's 2012 Six Nations Grand Slam in which Priestland's form was questioned.

"He quite rightly deserves to be number one in the squad at the moment.

"There is no point me being happy to be on the bench, or having a holiday, because I want to be pushing all the way.

"If I can push him, it will make him a better player and Wales a better team, then we are all winners."

Biggar, who made his Wales debut in the autumn of 2008, did not hide his excitement to be back in the Wales squad or his determination to make the four-match tour to Australia.

He wants to be among 18 players named after the Baa-Baas game to join the 16 advance-party players who fly to Brisbane for the three-Test series against the Aussies.

"It was brilliant to come back in on Monday morning," said Biggar.

"To see your name announced is something you want and to come back is a little bit like coming back into school.

"I am just really glad to be back and really looking forward to Saturday and, hopefully, if I get on the tour, pushing for a place out there.

"We are aware that the first-choice team flies out on Thursday and it's up to us, stepping up to the plate and showing we are competitive.

"There are a lot of guys pushing the starters all the way and a good game against the Barbarians will do our cause no harm."