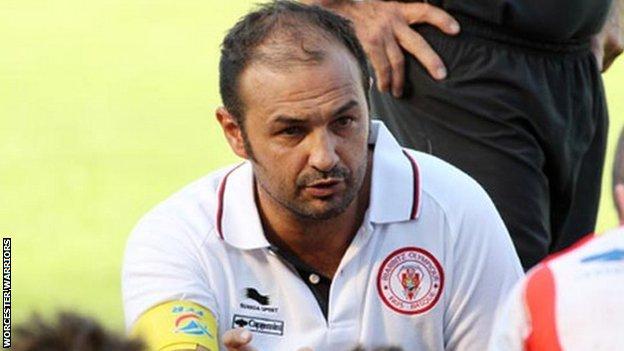 Worcester Warriors have completed their backroom team for next season's planned assault on an improved Premiership campaign by appointing Mathieu Rourre as their new attack consultant.

But Frenchman Rourre will remain the academy director at Biarritz, for whom he turned out in his playing days.

Rourre, who first worked with Worcester coach Richard Hill at Bristol, is the club's third appointment in eight days.

He follows the arrival of Nigel Redman and Phil Vickery to coach the forwards.

Rourre has been granted permission by Biarritz club president Serge Blanco to combine his coaching duties between the two clubs.

And, together with Hill and defence coach Phil Larder, they will be hoping this dash of French flair can improve Worcester's finishing place of 10th in the Premiership.

His big focus is staying on your feet and looking to play. It is a completely different approach and it will take time to bed in, but we are very excited about what he can add to the Warriors

In their first season back in the top flight, Hill's side won just seven of their 22 matches, finishing just four points above bottom club Newcastle.

And, having averaged just one try per game in the Premiership last season (and having failed to cross the line on seven separate occasions), Hill sees Rourre's appointment as the prelude to a much-needed change of attacking emphasis at Sixways.

"It is a completely different approach and it will take time to bed in, but we are very excited about this opportunity and what he can add to the Warriors.

"I first met Mathieu when I went to a conference and I got to know him very well. After that I went back to see him during my Bristol days and we would catch up and share ideas.

"He is right up to date on the latest techniques and play in the modern game and I used to invite him over to Bristol.

"He would work with us on phase play and counter-attack and the players at Bristol really enjoyed it. It was a different kind of work to what we had going on and we saw real results."

Rourre, who also played for Paris University Club and Racing Club France, was the French national academy manager between 2003 and 2008.