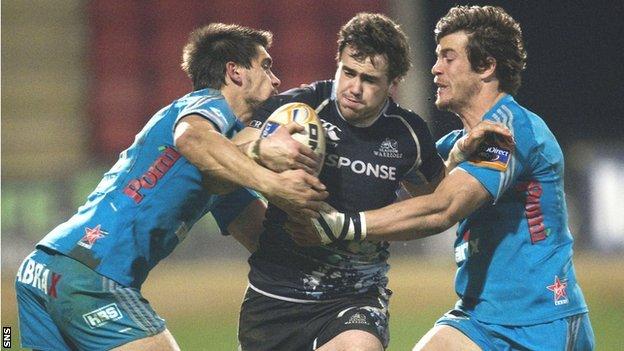 Edinburgh's Stuart McInally and Glasgow Warriors' Alex Dunbar have been called into the Scotland squad for the summer tour of Australasia.

McInally, the 21-year-old forward, will fly to Australia on Thursday to join the squad in time for their arrival in New South Wales.

He is a precautionary replacement for John Barclay, who has hurt his hand.

Warriors centre Dunbar, 22, is in Tasmania and will join the squad in Sydney on Friday.

"We've called up Stuart as a precaution given a hand injury that John Barclay sustained in training yesterday," said head coach Andy Robinson, whose team begin their three-game Test against the Wallabies in Newcastle on Tuesday.

"John should be available for selection for the Test but we felt it better to ensure we have sufficient back-row options.

"Alex will meet up with the squad tomorrow. We've gone for him as we are still liaising with the IRB, French Federation and Castres to have Max Evans join us as soon as possible."

McInally has played only two seasons of professional rugby but his performances for Edinburgh have earned him a contract extension to take him to 2014.

He has captained Scotland at each age group from Under-17 to Under-20 and has played for Scotland A.

Sean Lineen signed Dunbar for Glasgow in 2010 after a two-year stint at Selkirk.

After the match in New South Wales, the Scots take on Fiji and Samoa.