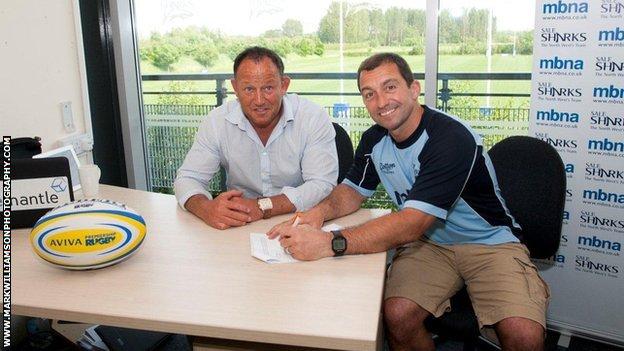 The former Scotland scrum-half, 40, spent five years as a player with the Sharks and resigned as head coach of Gloucester in April.

At the time Gloucester said they would begin legal proceedings if they found that his departure had been a result of an approach from Sale.

The claim was denied at the time by Sharks chief executive Steve Diamond.

What I've always wanted since returning to the club was a proven coach in the Premiership, and in Bryan Redpath that's exactly what we've got

Redpath said: "There have been a few changes here. Seven years away coaching down at Gloucester has been great for me and it's great to come back up. There are still a few old faces hanging around. I'm delighted with the move and am looking forward to the challenge ahead.

"It's a great move for the club to be playing at the new stadium at Salford, which is bigger and has easy access. We need to make it somewhere special for Sale Sharks - the venue definitely looks as though it's going to be good for us.

"I want to carry on what Steve has started. He's brought back a club culture. People who care about playing for Sale Sharks are important. I had five great years here and loved every minute. I want to make sure that everyone is playing here for the right reasons.

Redpath became Gloucester's head coach in 2009, after four years serving as backs coach and then assistant to Dean Ryan.

He led the Cherry and Whites to a highest finish of third in the Premiership in 2011, as well as winning the LV= Cup.

But he left Kingsholm with Gloucester seventh in the table and they narrowly missed out on claiming a Heineken Cup place for next season.

Sale finished sixth in the Premiership, guaranteeing that Heineken Cup rugby will be gracing their new home, the Salford City Stadium, next season.

Diamond said: "Anybody who knows what happened at our club in the last 15 months will be aware that we termed it 'Year Zero', and that was just the start. Looking to the future we have a number of good players joining us. What I've always wanted since returning to the club was a proven coach in the Premiership, and in Bryan Redpath that's exactly what we've got.

"Bryan became available from Gloucester at the end of last season. As soon as he did, we were keen to talk to him. Bryan is very similar to me in many respects. His DNA was on the club for a long time, as was mine. There are two routes we need to take going forward.

"I can take the strategy and drive the club forward off the field, but in the last weeks of last season I found myself trying to be 'master of all trades' and have to be honest in that nobody can do that well. I was therefore looking for someone who had a similar hardworking, knowledgeable outlook with no 'messing around' to deal with onfield matters. Bryan is absolutely ideal. He has very similar attributes to myself, although in all honesty he was a better player."