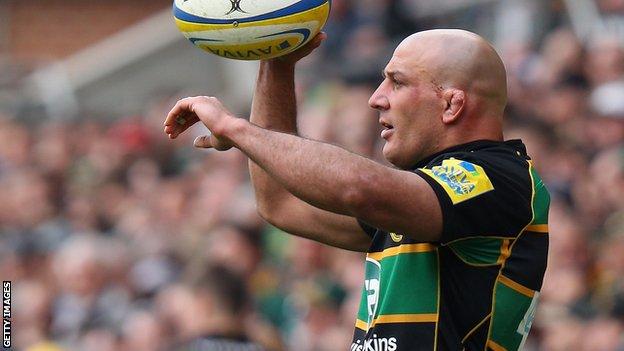 Northampton Saints hooker Andy Long has been forced to retire with a degenerative neck injury.

The 34-year-old was due to join Gloucester next season, but has had to quit the game following medical advice.

The two-time England cap played in May's his 201st and final top-flight appearance.

I've achieved everything I wanted to achieve out of rugby. I started playing aged four and went all the way to the top to play for England at Twickenham

"I am devastated that I was not able to contribute to Gloucester in the way that I hoped," he said.

"But I am nevertheless glad that my career finished in the way that it did, playing for a great club like Northampton in the Premiership knockouts."

After failing to make a single start in his first two campaigns at Franklin's Gardens, he has just completed his most influential season for Northampton, making the first XV on 14 occasions.

He also laid the groundwork for a future career off the pitch by taking a coaching role at Cambridge.

"I've loved being at the Saints and I'm very happy I was able to contribute to the first team in a meaningful way, especially over the past few months," he continued.

"I've achieved everything I wanted to achieve out of rugby. I started playing aged four and went all the way to the top to play for England at Twickenham.

"I've had 200 games of Premiership rugby and played for some great clubs who have all had magnificent supporters, and I'm at peace with the fact I'm having to retire.

"That said, I had signed for Gloucester so I wanted my career to continue, but I'd been carrying an injury which was causing me a few problems towards the end of last season, and the rehabilitation time from an operation would have meant that I would have been on the sidelines well into next season."