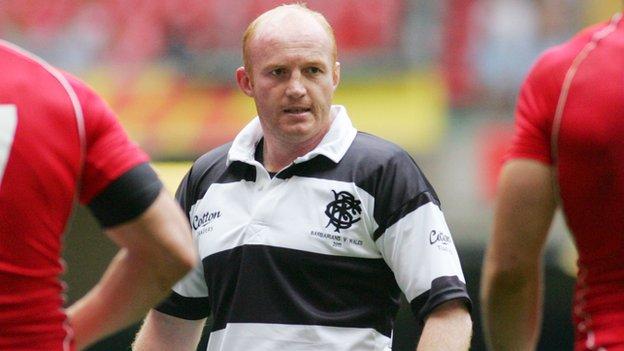 Martyn Williams admits he will avoid a "painful" experience when he wins his 100th cap for Wales against the Barbarians on Saturday.

The flanker, 36, has been recalled for bench duty and been guaranteed an appearance against the invitation club.

He said: "When you're in my position and you get into the 90s that is your goal and to have come up one short would have been pretty painful."

The fact that Wales are the only country to do so led to Williams making his debut against them in August, 1996.

The flanker has been recalled for bench duty, with Ospreys' Justin Tipuric starting in the number seven shirt.

That has come about because Wales have sent an advance guard of front-line players to Australia to acclimatise ahead of their first tour Test in Brisbane on Saturday, 9 June.

Last weekend at Twickenham, an England XV beat the invitational side and on Tuesday, at Gloucester's Kingsholm, the Baa-Baas narrowly beat Ireland.

Because of the circumstances Williams says winning a cap against the Barbarians feels as special as every other he has won.

The British and Irish Lion said: "We're all aware of the argument about should caps be awarded against the Barbarians.

"I've been fortunate, I got my first against them and I'll get my 100th so this will feel to me as special as any other cap I've got.

"So at the end of the day you're being picked for your country in your national stadium and to represent your country, so I think it's fully justifiable to give caps.

"There's a few guys winning their first caps as well and they'll remember the day for the rest of their lives.

"I can understand why people make that argument, but we look at it on the positive side on this side of the fence."

Williams was on the winning side when Wales met the Barbarians in 2011 in a dramatic 31-28 win over his own nation.

That was Williams' only match at that level since Wales' November 2010 Tests and was followed by a 99th cap against Argentina in August 2011, as Wales completed their build-up for the 2011 World Cup.

He was left out of the tournament squad and failed to win favour for the 2012 Six Nations, in which Sam Warburton's injury paved the way for Tipuric to make his mark.

When Tipuric was also injured during the Six Nations, Scarlet Aaron Shingler made his debut at open-side having built his reputation elsewhere in the back five.

Those Wales open-side preferences have left Williams on the sidelines for their last 13 Tests.

Earlier in his career he was overlooked in favour of Brett Sinkinson, a New Zealander who won 20 caps under Graham Henry while playing for Neath.

Sinkinson won 15 of those caps before being ruled ineligible for Wales amid the Grannygate scandal that broke in 2000, and five more after he later qualified for Wales on residency grounds.

But Williams is not bitter about those lost opportunities.

He said: "I keep reminding people about that when they wind me up about being stuck on 99 caps, but that's the way it was then.

"I loved my time when I was with Graham when he was coaching over here.

"So who's to say I would have been picked anyway if Brett wasn't?

"There were a lot of guys like Kingsley Jones, Jason Forster, Ian Boobyer - a lot of good sevens around at the time."