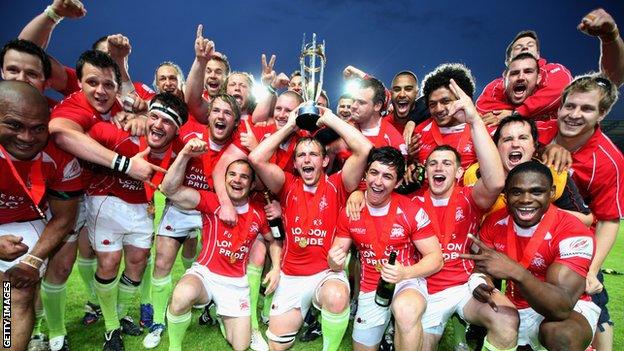 Championship winners London Welsh have confirmed they will appeal against the RFU decision that they are not eligible for promotion to the Premiership.

Last week a report from the governing body announced the Exiles had not achieved the minimum standards criteria for entry into the top flight.

The club had submitted plans to ground-share at the Kassam Stadium in Oxford.

"We shall be lodging an appeal in the very near future," club chairman Bleddyn Phillips said.

"In parallel, we are pursuing all other available opportunities to make sure we can take our rightful and deserved place in the Aviva Premiership."

Harlequins were the only one of the four London teams in the 2011-12 Premiership to actually play their home games in London. London Irish played in Reading, Wasps in Wycombe and Saracens in Watford

Welsh won the Championship title on Wednesday, with a 66-41 aggregate victory over Cornish Pirates and if their appeal is successful, it would see Newcastle Falcons relegated after finishing bottom of the Premiership.

The Exiles were forced to look for alternate venues with a capacity over 10,000 because their home ground, Old Deer Park, is too small, according to the Premiership's regulations.

However, their plans to switch to the Kassam, home of Oxford United FC, were turned down following an independent audit which found that not having primacy of tenure at the stadium did not meet the criteria for entry to the top flight.