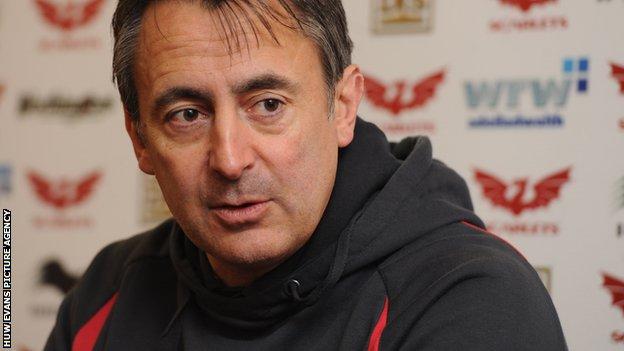 Nigel Davies has been appointed as the new director of rugby at Gloucester after leaving Scarlets.

The former Wales and Llanelli centre succeeds Bryan Redpath, who resigned in April and has since joined Sale Sharks as a director of rugby.

"Professionally, I know this is the right decision, but emotionally it has been one of the most difficult things to do," said Davies.

"I have always felt that at the right time, I'd want to challenge myself in a different environment and this new role presents me with that exciting new ambition.

"It has been a true honour and a privilege to be head coach of the Scarlets and the last four years has been one of the most proud periods of my professional career."

During his time at Scarlets, Davies twice helped them reach the last eight in the Amlin Challenge Cup and he been credited with developing a crop of exciting Welsh talent including international wing George North, centres Jon Davies and Scott Williams and fly-half Rhys Priestland.

Previously he was the Welsh Rugby Union's head of rugby development and was also assistant Wales coach to Gareth Jenkins from 2006 to 2007 before taking charge for a Test against South Africa following the dismissal of Jenkins after Wales's disappointing performance at the 2007 World Cup.

Davies had nine months left on his current Scarlets deal but Gloucester were willing to pay the Welsh region.

The Kingsholm outfit are understood to have also interviewed Carl Hogg, Steve Meehan and John Plumtree before deciding on Davies.

"Every time I have met Nigel I am more and more sure that he is the right man for the job," Gloucester chief executive Ken Nottage told BBC Radio Gloucestershire.

"We had some very good coaches who were very interested and available, and it was a long discussion. I think in these matters you have to pursue every avenue. But we are very, very pleased with where we have got to. Nigel was always our first choice."

Former Ireland and Scarlets flanker Simon Easterby will take over as head coach from Davies at Parc y Scarlets.