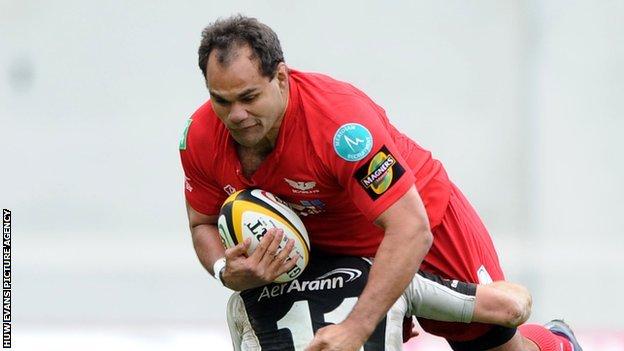 Scarlets prop Deacon Manu has signed a contract extension to remain at Parc y Scarlets for another two seasons.

The 33-year-old Fiji tight-head joined the Welsh region from Waikato Chiefs in August 2006 and has been an integral part of the side since then.

"I am delighted to have extended my contract with the Scarlets," Manu said.

"Rugby here has been a huge part of my life and career and there is a lot to look forward to... it has always been an honour to play for this region."

Manu, who was born in New Zealand to Fijian parents, made his international debut for Fiji against Scotland in 2009.

He went on to captain his country, leading them into the 2011 Rugby World Cup in New Zealand, and is delighted to have extended his staty with the Scarlets.

"We are an ambitious team, with some great talent within our squad, and know we have plenty more to achieve and our challenge and commitment is to bring silverware back to Parc y Scarlets," Manu added.

"We all know the potential the Scarlets have and the next two years will be an exciting and motivating time to be part of the Parc y Scarlets set-up with so much potential in this squad.

"We've got a good group of players and we're a close-knit group. This season we showed what we can do with some big wins in Europe and were right in the chase in the league until the last game, and this will only push us forward next season in terms of ambition and performance.

"I have always enjoyed playing my rugby here, it's a rugby community that you can feel very proud to be a part of.

"My family is really happy and settled in west Wales and we have been always given so much support by the club and our supporters - so it's been great to secure the next two seasons with the Scarlets.

"I look forward to playing my part in helping bringing forward new players as well as working alongside the other senior players to take the region forward next season."