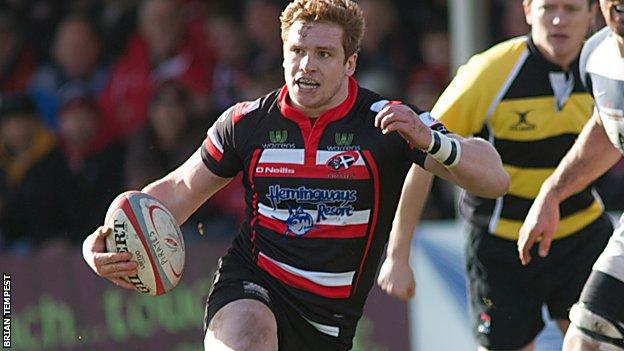 The 25-year-old was released by the Pirates after they earlier this week.

Cooper spent a year at the Mennaye having joined the club from Newport Gwent Dragons last summer.

He started 10 Championship matches last season and was a replacement in six more but scored just one try for the Pirates against Moseley in February.

Cooper told BBC Sport he was attracted to the island side due to its location, adding: "I thought it would have a lot in common with playing in Penzance as they're both fairly isolated geographically and I think that's a lot of what contributed to the good team dynamic that was built down at Pirates

"One thing I'm looking forward to is shorter travel times because they fly everywhere and hopefully their situation as an island will make the home games as something to really target as a focus for getting some wins on the board.

"Jersey have clearly done well to come through the leagues and I think there is a bit of a buzz building out there when it comes to the rugby."

Cooper is the fourth player Jersey have signed for next season, their first in the Championship.

But Cooper says he was disappointed to be let go by the Pirates as they trim their squad following news that their plans for a new stadium have been put on hold.

"It is a decision I have understood, but I certainly would have liked to have been kept on if I'd had the opportunity.

"Overall it has been a good season, but potentially one of missed opportunities where we could have gone on to the final and won the British and Irish Cup, and on our day could have turned London Welsh over.

"But when you look at it from a business perspective, the fact that the squad is being downsized next year until the outcome of the stadium is certain, I think the dual-registration system makes more sense if you're looking to save money."