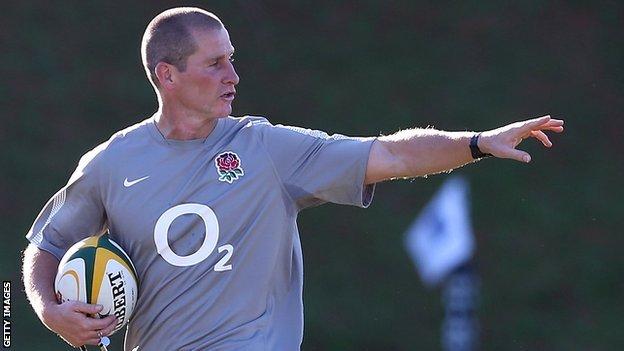 England head coach Stuart Lancaster insists he has not been in touch with Andy Farrell and that the former England assistant coach will not be joining the tour of South Africa.

Farrell has resigned as Saracens head coach and speculation has linked him with a return to the England set-up.

"I want to categorically confirm he won't be joining us out here as part of the coaching team," said Lancaster.

"I always said that I would look at my coaching team at the end of this tour."

Wasps forward Joe Launchbury has been ruled out of the tour by a knee injury and replaced by London Irish's Jamie Gibson.

But the focus is firmly on Farrell's future, with the 37-year-old free to return to the England set-up once he agrees a release from his six month notice period with Saracens.

He was part of Lancaster's coaching team during this season's Six Nations but stepped aside at the end of the tournament to continue his work with the Premiership club.

Mike Catt has taken over Farrell's role for the tour of South Africa. England are currently in Durban and begin their three-Test tour in the same city on 9 June.

Lancaster explained that Launchbury was injured during a training session before the squad departed.

"We are delighted for Jamie coming in but it is hugely disappointing for Joe," added the coach.

Centre Manu Tuilagi missed the 42-man squad's first training session with a foot injury but Lancaster was confident he would recover in time for the opening Test.