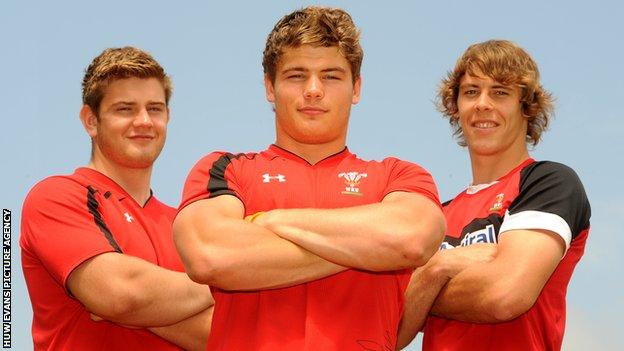 Robert Howley, the Wales caretaker coach, has cut five players from 39-man squad for the summer Test series against Australia.

Dan Biggar, Martyn Williams, Adam Warren, Will Harries and Ryan Bevington will all stay at home.

Wing Harry Robinson, prop Rhodri Jones and full-back Liam Williams have all been selected for the three Test series against the Wallabies in Australia.

All three made their Wales debuts in the 30-21 win over the Barbarians.

Howley announced the 34-man squad which will tasked with recording a first Welsh victory on Australian soil since 1969.

Flanker Williams confirmed his retirement in the wake of the win over the Baa-Baas, a game in which he won his 100th cap to join Stephen Jones and Gareth Thomas as Welsh-cap centurions.

Biggar may in any case have been ruled out by a shoulder injury that forced him off at the Millennium Stadium.

And Howley said dropping Biggar was a particularly tough choice.

"For those four who played in this game, they showed outstanding character and professionalism and were an integral part of the win," said Howley.

"They were told earlier in the week - each player at a different time - so they could focus on the preparation and I have huge respect for these guys.

"It was entirely my decision, I didn't discuss it with Warren [Gatland], and it was the hardest thing I have had to do as a coach, in particular for Dan Biggar.

"It is not a reflection on Dan's form and over the last four months he has played particularly well for the Ospreys.

It was entirely my decision, I didn't discuss it with Warren [Gatland], and it was the hardest thing I have had to do as a coach

"James [Hook] is adept at playing at 12 and 10 and is a hugely talented player. His kicking was exceptional and his composure was fantastic under pressure [against the Barbarians]."

Wales' 16 frontline players flew out to Australia earlier this week before the Barbarians game, with defence coach Shaun Edwards, to prepare for the first Test against the Wallabies in Brisbane on 9 June.

Howley was left with 23 players to choose from for the clash with the Barbarians and has cut five players from the squad left behind.

He was quick to highlight the contribution of Cardiff Blues flyer Robinson who crossed for his first Test try for Wales.

"Harry Robinson was outstanding on the wing when he had time and space," said Howley.

"It was a Test match and we played like it. It was a huge squad effort this week. It wasn't pretty, there was a lot of turnover ball, but there's a lot we can work on in Australia.

"We're looking forward to it, it will be a momentous occasion next Saturday and we'll be going out there with every effort."

Ospreys fly-half Biggar, who left the field midway through the second-half with a shoulder injury, may have been doubtful for the tour but he wasn't selected for the final squad.

Flanker Williams, along with wing Shane Williams, played his last game of rugby at the Millennium Stadium and wasn't expected to make the trip Down Under.

Scarlets centre Warren, who made his Wales debut as a replacement against the Baabaas, Dragons wing Harries and Ospreys prop Bevington were all cut from the squad.

Ian Evans and Alun Wyn Jones will both miss selection for the first Test against Australia. Evans will miss the first Test in Australia to get married, while Jones could also miss out in order to attend his sister's wedding.

Ospreys provide half the pack, with Ian Evans and Alun Wyn Jones in tandem in the second row. Evans will miss the first Test in Australia to get married, while Jones could also miss out in order to attend his sister's wedding.