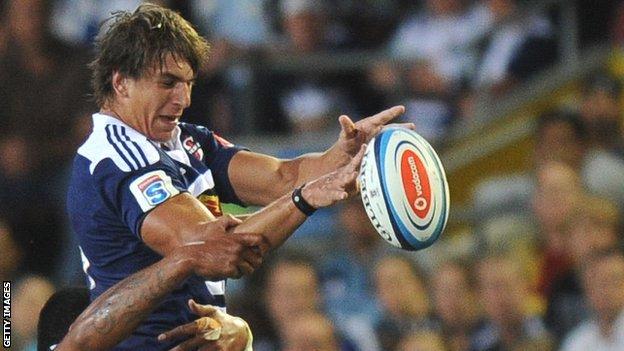 South Africa have named nine uncapped players in the squad for the three-Test series against England.

The Springboks will be without veteran duo Victor Matfield and John Smit who retired after the World Cup.

"What we've lost in experience, we've made up in passion and desire to play for the Springboks," said Meyer, who succeeded Peter de Villiers this year.

"We were always looking to start the season with an experienced squad to face England, but injuries to certain players and the non-availability of others have made it difficult."

Meyer revealed that Du Preez had told the coach he was not up to the rigours of international rugby, having not played for over two months.

"I had a few meetings with him and he said he wasn't 100% sure he's at his best," said Meyer. "It was a hard decision to leave him out but it shows the character of the man that he told me to go with the youngsters if I felt he was a 50-50 selection."

Ulster scrum-half Ruan Pienaar has made the squad, as has centre Frans Steyn, who has returned to play for South Africa's Sharks from French club Racing Metro.

Meyer will be overseeing his first match as Springboks coach after De Villiers stepped down in the aftermath of the 11-9 defeat by Australia in the quarter-finals of the World Cup.

"We have put together a squad with a nice balance between a number of veterans and players with less experience as we start to build for the rest of the season," added Meyer, who will delay naming his captain until next week.

"The nine uncapped players have all put up their hands during Vodacom Super Rugby this year and we know they have what it takes to succeed at the highest level."

Six of the group have won more than 40 caps, with winger Bryan Habana the most experienced with 74 appearances.